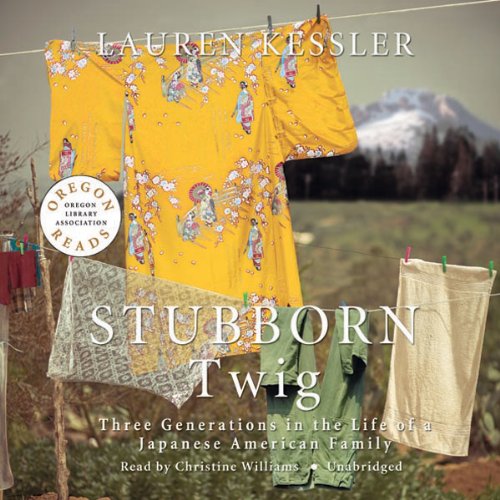 Stubborn Twig is the true story of immigrants making their way in a new land, a moving saga about the promise and perils of becoming an American.

Masuo Yasui arrived in America in 1903 with big dreams and empty pockets. He worked on the railroads, in a cannery, and as a houseboy before settling in Oregon to open a store, raise a large family, and become one of the area's most successful orchardists. As Masuo broke the color barrier in the local business community, his American-born children broke it in school, scouts, and sports.

But their lives changed forever on December 7, 1941, when they were forced from their homes into vast inland camps. Although shamed and broken, the Yasui family would yet endure to claim their place as Americans.

This is a story everyone should read. The story that did not want to be exposed yet needed to be for us all to understand. The love and honor in a family that was over shadowed by some of the darkest days in US history. Well performed.

Although this may be a Japanese American journey into America, it speaks about the ugliness, prejudice, and hate as well as the kindness, strength and heart of humanity in America. Unfortunately, we have not yet learn the lessons of yesteryears.

This is a very good book to read. I learned a lot. I would definitely recommend it to anyone.

An Historic Journey of a Japanese American Family

This historic but true telling of generations of a Japanese family who immigrated to America like so many other immigrants but we're not even allowed to become citizens is so discriminatory, it makes me angry. I believe this story still resonates today the way Chinese Americans and others with Asian features are being discriminated against today because of COVID. As the saying goes, "The more things change, the more they stay the same." This story should be required learning in high school history classes throughout the country as should other minority and oppressed people's stories.

As a bi-racial Japanese American who lived in Japan for the better part of my childhood, I am partial to books about Japan, Japanese Americans, and history. So this book would seem to be a perfect fit, but the narration gets in the way. The story is slow - that’s okay. But the pronunciation of the Japanese words … ouch! For this story, this subject in particular involving first and second generation Japanese Americans, I would have hoped for correct pronunciation of Japanese names and words. For example, one main character’s name - Shizuyo (or Shizuyou) - is repeatedly read as a drawn out as Shizuuyoo. Other Japanese names, words, and phrases are read with an American accent. Granted, many of your readers won’t notice if they don’t speak Japanese. But it really detracts from the story for those who do.

to be different no matter whence one comes. this is a history with marginal story lines except with regard to each person's path. if you're looking for story. go elsewhere. If a review of American prejudice and withstanding it is your goal. buy this book.