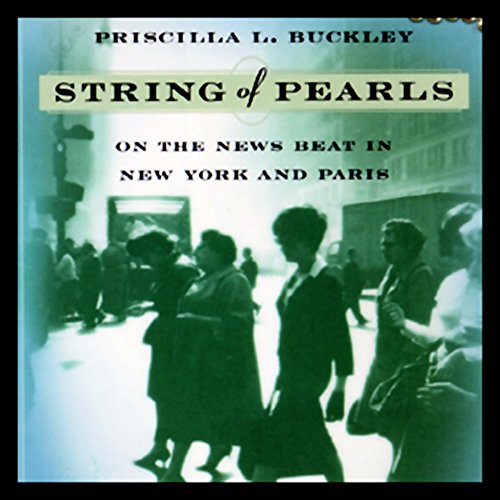 Priscilla Buckley is probably known for her long and admired tenure as managing editor of the conservative political journal National Review, founded in the 1950s by her brother, William F. Buckley, Jr. But in String of Pearls we meet a different Priscilla, young Pitts Buckley, just out of Smith, eager for the next step up from the college paper to "real" journalism. There she is, in her proper wool suit, her cashmere sweater, and in her string of pearls, notebook at the ready, United Press Radio News Department's fledgling employee.

The war in Europe was winding to its close. For Buckley, the atmosphere in UP's New York offices was a heady one; the journalists worked furiously but had time to play practical jokes, stage mock battles on the newsroom floor, and treasure the funny stories that haste and tension engender. Young Priscilla fit right in; she made friends, wrote copy for the reporters to read on the air ("Keep the sentences short!"), and joined in the fun and frequent hilarity. It was a demanding, sometimes heartbreaking, and always vibrant period.

The author was pleased a few years later to be offered a job at the Paris bureau of United Press. The young writer who has spent some of her girlhood years living in prewar France with her parents and her numerous siblings found a different Paris at war's end: scars of the prolonged occupation were everywhere. It was a poignant time, but for Priscilla and her friends there was laughter and comic misadventures as well, and she shares them, along with varied characters gathered at United Press at the time, with us.

Buckley's stay in Paris was cut short by a summons from brother Bill: Would she be interested in working with him on the new magazine he was starting? Thus ended her UP days, and this began a new and glowing journalistic career.

While I enjoyed this book and found the reader to be totally right for it as well, it did seem as though it was written for the amusement of "Pits" Buckley herself. I would have preferred a little more detail about life in postwar Paris and less anecdotal tales of highjinks in the press room. Having been to Paris (well, once and for only 5 days) it was interesting to recognize some familiar places.