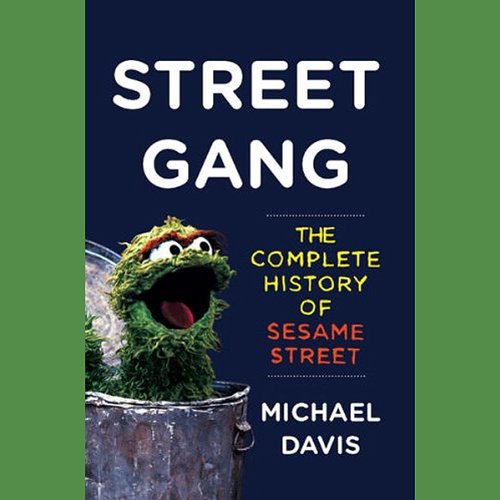 When the first episode aired on Nov. 10, 1969, Sesame Street revolutionized the way education was presented to children on television. It has since become the longest-running children's show in history, and today reaches 8 million pre-schoolers on 350 PBS stations and airs in 120 countries.

Street Gang is the compelling and often comical story of the creation and history of this media masterpiece and pop culture landmark, told with the cooperation of one of the show's co-founders, Joan Ganz Cooney. Sesame Street was born as the result of a discussion at a dinner party at Conney's home about poor children's programming and hit the air as a big bang of creative fushion from Jim Henson and company, quickly rocketing to success.

This audio is narrated by Caroll Spinney, the voice of Big Bird and Oscar the Grouch. Spinney is the winner of four Emmy Awards and two Grammys, and has received both a star on the Hollywood Walk of Fame and the Library of Congress's Living Legend award for his work on Sesame Street. In 2006, Spinney was honored with the National Academy of Telelvsion Arts and Sciences' Lifetime Achievement Award.

I really enjoyed this audio book. The story was something I was interested in, and it delivered.. I found out the behind the scenes stuff that I didnt know about and having it narrated by the voice of Big Bird was definitely a plus..

The only problem was that there were a couple of large sections of the story where they were just rattling off names and their jobs.. And it was just so dry that I caught myself tuning out for a while... Happily it wasn't that large of a section, and the actual stories made up for it...

LIke millions of other kids, I grew up on Sesame Street, and hearing the stories about the people who made it was wonderful... Reliving the episodes when Mr Hooper died was a sad moment, but it made me realize how these characters touched my life... I was honestly surprised that the characters were actors with different names and completely different lives... (I shouldnt have been, but it took me off guard)

I watched as a kid. I had the toy brownstone and plastic characters. Now I'm a teacher and a mother of a bicultural child, and I have my daughter watch "Sesame Street Old School" videos (episodes from the late 60s and 70s - the ones I grew up on). I've long had a vague awareness that Sesame Street was/is a groundbreaking, well-researched show, but now that I've listened to this audiobook I have a much better understanding of what went into creating it. It's heartwarming to hear about how committed the originators were to achieving their vision. Other reviewers have complained about Caroll Spinney's narration, but for me hearing him tell a story that's so close to his own heart made the experience more meaningful.

An important subject, but hardly gripping

Davis writes a good book, and this history of Sesame Street is not poorly written, to be sure. The problem is that the history of the show and its Muppet characters is just not particularly engaging, even for someone like me who grew up watching it and who still loves the Muppets. There's simply almost no drama in the details: a bunch of smart, well-meaning people got together and made a show that changed the history of children's TV. That's about all you need to know. There were no massive hurdles to overcome, no last-minute crisis to be dramatically solved, etc. As a story, it's just not gripping. Perhaps because of this, the author goes off at times on the personal problems of some of the participants, sliding into tabloid journalism at times while he looks for something out of the ordinary. And while it goes without saying that Caroll Spinney is eminently qualified to talk about Sesame Street, as a narrator he's only average. Unfortunately, there are many points where unnatural pauses or intonation soil his narration that should have had a second take recorded, but the production team apparently decided not to bother. The 30-minute interview with Spinney and the author included as a bonus at the end of the book is probably the most interesting part.

As a father of a toddler; who is now fully immersed in the Sesame Street world, it was nice to get the history of a wonderful organization. Caroll Spinney does an excellent job narrating, and the interview with him at the end brings it all together.

This audiobook is terrible

The narrator randomly skips paragraphs throughout each chapter and makes it extremely hard to follow along with the book. If you are buying this as a reading aid I definitely would not recommend it. Two thumbs down.

A great history of one of the most famous children's television shows of all time. A must-read (or, rather, a must-hear) for any Sesame Street or Muppet fans out there.

When Jim Henson's memorial service was held, Carroll Spinney dressed up as Big Bird and sang "Being Green", a song written by Joe Raposo for Kermit the Frog (Henson) to sing. He concludes it with "Thank you Kermit" and the audience knew what he meant.
Henson--and Joan Ganz Cooney, Raposo, Spinney and others--was a major part of the success of Sesame Street.

This interesting book traces the genesis of the show and has bios of the various figures involved. It does start off with Henson's funeral but that sets up the message that his life really mattered, and his friends would miss him. Yes there are sad moments here, people gone too soon, but also many happy moments and great achievements. Davis' tale covers it all and Spinney's voice is just perfect for it. (At the end, author Davis interviews Spinney--nice feature, but I must admit I'm glad the author didn't narrate the whole book.
Davis' voice is a bit gruff; Spinney's easier on the ears). Nice trivia and well written.

History of the Children's Television Workshop

A book subtitled The Complete History of Sesame Street, narrated by the guy who does the voice of Big Bird and Oscar the Grouch. Sounds foolproof, right? Sadly, it is not. The book should have been subtitled The Complete History of Children's Television Workshop, as it is a history of the people (and I do mean history - this includes detailed biographies of the parents of the people who ended up founding or working on Sesame Street) and the business behind Sesame Street, and manages to focus surprisingly little on the actual show itself. The book is a good third of the way through before the show even launches.
If that's what you're after then you'll enjoy this book, but it wasn't for me.

Would you be willing to try another one of Caroll Spinney’s performances?

NO! I cannot fathom how this narrator got a job reading books aloud. He speaks like a man with a nose-full of mucous, and still manages to be monotonously nasal. He also fairly routinely mispronounces words, putting accent on the wrong syllable, adding syllables to some words ("summarily") and somehow deleting syllables from others ("spectacularly"). I got to the first airing and reactions of Sesame Street, and just couldn't take any more of him. If he is the only option in Audio, I'll go buy the paper book or E-book.

I can't bring myself to finish this book

Perhaps it is not fair to rate a book that I have not finished, but I want to warn anyone else out there who saw all of the high ratings for this book that it is not nearly as interesting as it appears.

The first problem that I have with the book is the narrator. His voice is a combination of monotony and condescension which I find insulting and hard to listen to. This is the first audio book I have listened to which is not an autobiography read by the author, so maybe that is part of the problem.

The content of the book is also incredibly dull so far. The book opens with Jim Henson's funeral, but keeps cutting from the funeral to describe the thoughts of some other people who helped create Sesame Street. There is a long lament against Henson's decision to license the Muppets with Disney, and it seems like a personal vendetta the author has against Michael Eisner.

The first chapter opens by going in-depth describing some family who originally came up with the idea for Sesame Street, but once again I find myself wondering why the details of these people are so relevant. I'm not sure if the book actually drags on or if it's just the narrator's voice that makes it seem like these details just go on forever, but at this point I do not see myself being able to finish this book.

Perhaps it's the fact that the story opens with a funeral that gives the story such a depressing tone. It would have been better to open up on a livelier note.