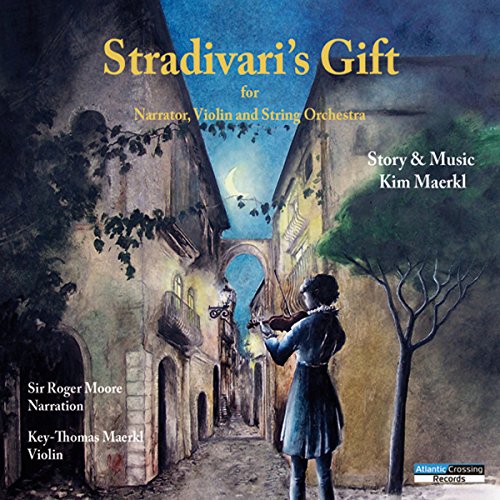 Stradivari's Gift takes the listener on a historical journey to 17th-century Italy and the violin shop of Antonio Stradivari. The story of the violinist Raphael and his gripping encounter with Stradivari brings to life the extraordinary achievements and unique magic of one of the world's most renowned violin makers. The narration of Sir Roger Moore combines with original music for violin and string orchestra to create a powerful listening experience.

Author biography: Kim Maerkl was born in 1961 in Cleveland, Ohio. She is an author, a composer, and a producer. Her works have been performed in concert halls and theaters throughout Europe and released by publishers in America, Germany, and Switzerland. She is a Fulbright scholar.

Narrator biography: Sir Roger Moore is a British actor born on October 14, 1927, in London, England. He is best known for playing the secret agent James Bond. He was knighted in 2003 and was named a commander in France's National Order of Arts and Letters in 2008. He is also a Goodwill Ambassador for the charity organization UNICEF.

Great for a good old fashioned evening of listening to great music and narration. No visuals just your imagination.

The story takes you back to a time where a master craftsman made amazing instruments. A glimpse into the life of Antonio Stradivari.

Which character – as performed by Roger Moore – was your favorite?

Roger Moore's aged voice draws you into the story.

Key Maerkl's virtuoso violin performance will give you chills. It is powerful and moving.