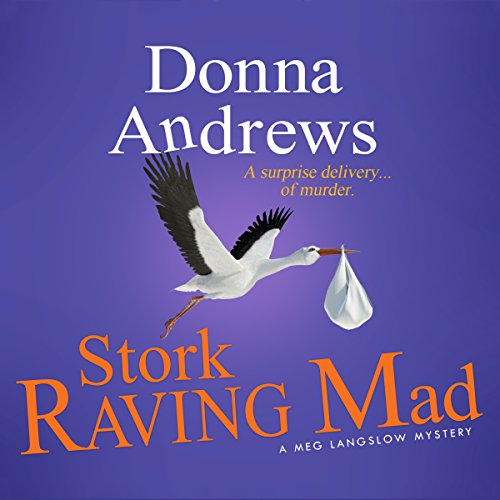 Meg Langslow is pregnant with twins when Michael asks if she wouldn't mind having a houseguest. One of his doctoral students is directing his new translation of a play by a minor Spanish playwright, who has agreed to come to town for the production. Surely they can spare some room for such an important academic cause?

Señor Mendoza turns out to be a partygoer who loves to spend raucous evenings among adoring students...at Casa Langslow. Into this chaos arrives the dean of the English department, who insists the play be canceled.

Then the unthinkable happens: the dean is found murdered, and Meg's house has become a crime scene. Now it's up to Meg to help Chief Burke solve the murders, rescue the student's dissertation, make sure Michael doesn't lose tenure, and, while she's at it, give birth to twins. Encore! Encore!

An especially funny book with a good murder plot

In Stork Raving Mad by Donna Andrews, Meg Langslow is weighed down by twins due any day and a house completely full with at least two dozen drama students and a bunch of computer student interns crowded into sleeping bags in every spare room. The furnace in Caerphilly College has been broken for over a month, creating frigid conditions unsafe for the student living facilities, so Meg and Michael are doing their part to help with the crisis by letting many of Michael's drama students hunker down in their home. Then, Dr. Wright, an English department dean, and Dr. Blanco, an employee of the administrative services department, arrive unannounced to see doctoral candidate Ramon Soto. The student has translated and will be directing a play by Señor Mendoza, a Spanish playwright heretofore believed killed by Franco but who has arrived to see the play, adding another visitor to Meg and Michael's house.

Stork Raving Mad is the 12th book in the Meg Langslow series and just as much fun as the other books in the series. I especially had fun hearing how Meg and Michael, deciding not to know the sex(es) of the twins, call them silly names of pairs, such as Tweedle Dum and Tweedle Dee, Rosencranz and Gildenstern, or Woodward and Bernstein. Meg's descriptions of having to deal with carrying twins also have plenty of humor to them.

The plot of this book has lots of great angles to it, and it really keeps us guessing as to the identity of the murderer, jumping from suspect to suspect as the plot develops. There are so many creative twists to the book that I was kept drawn to the book, only reluctantly putting it down for a few minutes. I have enjoyed every book in this delightful series, but this is an especially strong one.

As with all the books in the series, the characters really keep this book fun. Not only do we get all the usual creative, vividly drawn characters, but we get plenty of fun new characters to add to the cast list. The situation of dozens of students living in the house, added to the lively character of Señor Mendoza, gives us lots of people to enjoy.

Bernadette Dunne continues as narrator of this audiobook series. She serves as a terrific narrator, giving real life to the book. Dunne uses such great expression as she reads, using strong timing and inflections. She also uses creative voices for each character, which is especially valuable for this book because of the many unique characters.

I really loved listening to Stork Raving Mad. This book exemplifies the madcap fun of the series and keeps us guessing about the murderer and also about Meg's babies, as we wonder about their sexes and real names (since I rather doubt they will be named Chip and Dale!). I give this book five stars.

Lot fun to listen to.. love how the time line progresses. Like real life. Give it a listen.

The entire meg langslow series is great. They are fun mysteries without all the blood and gore

With the college's heating system unrepaired for weeks, the old Victorian is filled with housing students from the basement to the attic and almost every room in between. Add in a visiting Spanish playwright, a pair of positively awful professors wanting to wreak havoc on the drama department, a confusing murder, and Meg's relatives to have a thoroughly enjoyable fun read!

Meg Langslow is 8 ½ months pregnant with twins as this hilarious tale begins. It’s winter and the heating system at Caerphilly College is out leaving the students to scramble for warm accommodations. At least a dozen are camped out in Meg and Michael’s living room. The rest of the Victorian mansion houses Meg’s brother Rob, her cousin Rose, and her grandfather Dr. Blake. A group of programmers from Rob’s computer gaming business are testing a new game in the basement.

The front doorbell keeps ringing. Meg waddles to open it and discovers two professors from the college. They are looking for a particular student in order to tell him that his dissertation must change from the drama featuring a new translation of a Spanish playwright’s work. One says this is the “English” department, and one says the play is obscene. Meg’s husband Michael is the head of the drama department and says this is outrageous. All the approvals were received years ago; approval for which no one has any record. An emergency meeting of the dissertation committee is called to be held then and there. While the two disagreeable professors on site await the arrival of additional professors, they scatter to areas they can work and request tea. Rose makes the tea amid a flurry of activity in the kitchen as the now elderly playwright who has come to town is making Spanish food. Chaos ensues when he drops his bottle of prescription heart pills. Dozens of students crawl on the floor to find them.

After the additional professors arrive, Meg goes to fetch the two on site, and finds the English professor dead in the library. Chief Burke is called and quickly arrives at the scene. When he asks Meg how many people were home, she counts up over 50! As the Chief begins questioning them, Meg finally finds a quiet spot for a nap. It doesn’t last long before activity swarms around her once again.

Donna Andrews has given us a glimpse into pregnancy while bringing us a bevy of disparate characters with more than one crisis on their hands. It was nice to see Michael have a larger role as husband, father-to-be, and professor. It was fun to see Meg and Michael changing roles into parents. They added comedy at every turn calling the twins names of famous duos. This slice of life intertwines with the mystery seamlessly while the myriad characters bring it all to life. Kudos to Donna Andrews yet again for the twelfth Meg Langslow mystery!

Finally. One of my favs now on audio. Love the story, the narrator...just everything was fun.

Cannot Listen To This Narrator

I thought the book would be light listening, not too heavy. But I couldn’t finish the first chapter because the narrator’s voice was too annoying. She sounds like a 60 year old lifetime smoker instead of a young woman pregnant with twins. I’m going to return it if possible,