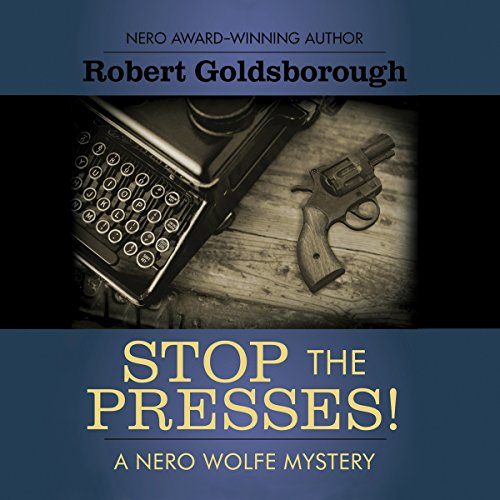 There are few people Nero Wolfe respects, and Lon Cohen of the New York Gazette is one of them. So when Cohen asks for a favor, Wolfe is inclined to listen.

According to Cohen, someone wants to kill the Gazette's gossip columnist, Cameron Clay. Death threats are a regular hazard for Clay, who's hurled insults and accusations at every bold-faced name in the five boroughs. But the latest threats have carried a more sinister tone. The columnist has narrowed his potential killers down to five people.

When Clay turns up dead, the cops deem it a suicide. The bigwigs at the Gazette don't agree, so they retain Wolfe to figure out which of the suspects had the mettle to pull the trigger.

Decent story, read by Baron Harkonnen on a bad day

What would have made Stop the Presses! better?

Not sure, though I tend to like all Nero Wolfe novels, Stout and Goldsborough.

I don't know where to start. I stopped the playback in less than 10 minutes. The faux British Archie is simply terrible. It sounds as though the narrator may be British but trying out a semi-north American accent without ever having heard us speak? Just terrible. His Lon Cohen was lousy and his Nero Wolfe was depressingly sad.

Primarily disappointment. While Mr. Ganser wasn't quite up to the standard of Michael Pritchard as Archie (just my opinion of course), I felt he was very capable and after I began Silver Spire I found his narration style to be entertaining, if noticeably different from the "traditional" Archie of Pritchard. This narrator is a step down in every way. I won't say he's the worst narrator ever, or something silly like that. I can think of another audiobook with an objectively worse narrator for sale on this site. I do feel he is utterly and completely wrong for this book. Just... I cannot finish the first chapter.

Narrator so Distracting I Couldn't Finish

I love Rex Stout and enjoy this author also. I will finish this book in the printed version so I will be able to give the story proper attention. This narrator clearly has no familiarity with Nero, Archie, Lon, or any of the other beloved characters. Do yourself a favor and listen to the sample first to determine if you'll be able to immerse yourself in this performance.

It was Nero Wolfe.

Would you be willing to try another one of Peter Berkrot’s performances?

What character would you cut from Stop the Presses!?

Sometimes hard to tell who is talking. Archie often sounded like Lily Rowen.

Plot is ok, narrator is terrible

I fully concur with the other reviewers. The plot is ok, but the narrator at times affects a variety of accents (Southern US, Midlands English, vaguely Dublin Irish, Transatlantic) while delivering every sentence with an unwarranted short-of-breath theatricality. It is very distracting and only a determined listener will soldier through until the end.

Read it if you wish, but don't listen!

I can't imagine who would enjoy this, or how this reader was hired, or who could have approved him. It clearly wasn't anyone who had listened to the original recordings by Mr. Prichard. Even the readings by Mr. Gancer, inferior as they were, weren't offensive, as these are.

I couldn't make it to the ending. After just a few chapters I gave up on the Audible version. The written version, as others have noted, is disappointing in comparison to prior books, but it was tolérable.

His portrayals bore no resemblance to either how the characters were described in the books or how they were portrayed in the original audible series...nor even in the high-quality tv series with Timothy Hutton and Maury Chaykin. I won't buy another Audible book read by him.

What character would you cut from Stop the Presses!?

Aside from the reader, none were both objectionable and disposable

Please replace the narrator in future books. I'll be skipping the next two, which are already out, and hope they will go back to one of the prior two narrators or someone else for the books coming after The Battered Badge.

I like the way the author keeps to the spirit of Nero Wolfe and Archie and the rest of them. He is true to the spirit. Alas the book would have been more enjoyable with a different reader. I swear I heard an occasional Irish lilt in Archie's portrayal..and that's when he didn't sound like Albert Campion or Lord Peter. The reader is perfect for the British cozy. He should stick to that and the publisher should find a reader who can do Archie, Saul, Lon and the rest of the city dwellers in the voice Stout .. And now Goldsborough...meant them to have.

This is NOT the voice of Archie Goodwin. Archie is Ohio-born and with years of New York City under his belt.. if this book were from Nero' s point of view the narration would have been fine. As it was, midway through I had to stop listening.. the voice just ruined it.

Would you consider the audio edition of Stop the Presses! to be better than the print version?

What other book might you compare Stop the Presses! to and why?

Rex Stout books narrated by Michael Prichard are much better.

His interpretation of the characters and their 'voices' just didn't ring true to the characters. Michael Prichard does a much better job. This narrator works way to hard at acting the book and distracts from the story. He actually makes the characters seem silly.

Who chose this narrator?

While this narrator might be good for another series, he definitely did not fit the Nero Wolfe scenario. The voices were indistinguishable and the whispering effect was so distracting and irritating. And what was with the almost southern accent when they lived in New York? My husband and I have read or listened to all the old ones and several of the new ones, but we could not wait for this one to be over.