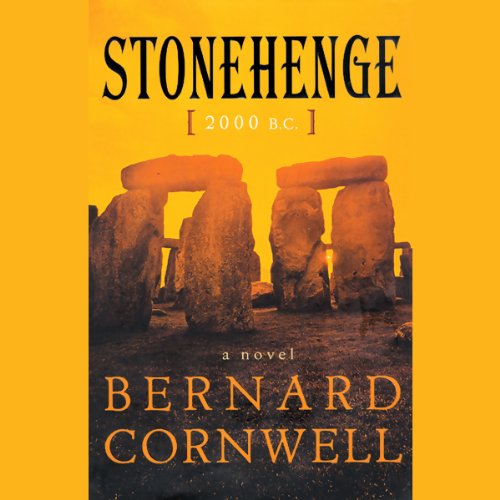 Four thousand years ago, a stranger's death at the Old Temple of Ratharryn, and his ominous "gift" of gold, precipitates the building of what for centuries to come will be known as one of mankind's most singular and remarkable achievements. Bernard Cornwell's epic novel Stonehenge catapults us into a powerful and vibrant world of ritual and sacrifice at once timeless and wholly original, a tale of patricide, betrayal, and murder; of bloody brotherly rivalry; and of the never-ending pursuit of power, wealth, and spiritual fulfillment.

Three brothers, deadly rivals, are uneasily united in their quest to create a temple to their gods. There is Lengar, the eldest, a ruthless warrior intent on replacing his father as chief of the tribe of Ratharryn; Camaban, his bastard brother, a sorcerer whose religious fervor inspires the plan for Stonehenge; and Saban, the youngest, through whose expertise the temple will finally be completed. Divided by blood but united, precariously, by a shared vision, the brothers begin erecting their mighty ring of granite, aligning towering stones to the movement of the heavenly bodies, and raising arches to appease and unite their gods. Caught between the zealousness of his ambitious brothers, Saban becomes the true leader of his people, a peacemaker who will live to see the temple built in the name of salvation and regeneration.

"A sweeping, dramatic epic...a story of human greed and passion backlit by the construction of [Stonehenge]." (Bookpage)
"Cornwell's portrayal of life and death in ancient Britain is graphic, gritty, and riveting. However, his detailed descriptions of how Stonehenge was constructed utilizing primitive engineering are the real strength of this book." (Publishers Weekly)

He spoilt this book and he spoilt War & Peace - why do you give classic or historical books to someone who is so devoid of any ability to transform the words into anything resembling reality for the the characters or background scenes? His manner of speaking was completely wrong for this book; he should be left to read books by the likes of Oscar Wilde, which would be much more in keeping with his tone and manner of delivery.

Disappointing and difficult to get through.

It all moves at a level you'd expect for prehistorical people. Fight, build, fight some more, survival, build again, all without a lot of complexity. The characters are single minded and there are no great surprises.

If you're interested in this book, I would highly recommend buying the paperback and not the audiobook. The narrator is incredibly irritating, and has been constant negative reinforcement against listening.

The book is a decent read - not great, but decent - but the horrible reader has almost made me stop reading the book several times.

I tried very hard to enjoy this book but I could not get past the dire naration style. This is the only audio book I have left unfinished.

most boring book I have listened to!

I have never written a review. Of the hundred plus books I have listened to from audible this was the most boring and unlistenable I have come across. I have never not gotten to the end of book but couldn't do it with this one.

Would you try another book from Bernard Cornwell and/or Frederick Davidson?

Has Stonehenge turned you off from other books in this genre?

No just from the reader.

It is hard to describe how exactly the narrator detracted from the book. I have several of Bernard Cornwell's books and enjoy them. I have not been able to understand how the narrators are selected. This was truly a painful listen and took all my tolerance to get through the first chapter. I could not go further. I love audiobooks but this was torture. It might be a good story but Ill have to wait till I have time to read it myself.

If you could play editor, what scene or scenes would you have cut from Stonehenge?

Bernard, if you are listening, pay more attention to who is narrating your books. Listeners, skip this rendition and buy the hard copy.

Story is good. Performance not so good

Where does Stonehenge rank among all the audiobooks you’ve listened to so far?

It's what a like most but the reading is poor.

What was one of the most memorable moments of Stonehenge?

The confrontation between father &son in the first chapter.

I enjoy all of Cornwells stories but this narrator ion was poor.

At the outset, I also thought that I would not like this book due to the narrator. But I was surprised (pleasantly) and really enjoyed listening to the book. You can get past the narrator after a while, and the book is almost up to Cornwall's standards of historical detail.

Stick with it, and I think you will also enjoy the book. A bit predictable at times, but still listenable.

The story is an interesting exploration of the life of early England, and the reason an undertaking like that would take place. I don't know if the actual procedures described are accurate, but they sounded plausible to me. The characters were well developed, and the storyline kept my interest

Fredrick Davidson's accent and phrasing sounded like high tea at Buckingham palace to me. It distracted from the story and was a constant irritant.

This is probably another excellent book by Cornwell.

Unfortunately the narrater (Frederick Davidson) is truly awful, he sounds like a bad impersonation of Lawrence Olivier declaiming Shakespeare. It is so ear bogglingly dreadful that five minutes of listening was more than enough. His voice is not suitable for prolonged listening being whiney, nasal and deeply, deeply irritating. Davidson's high camp delivery is also not suited to the subject matter.

As someone who loves Bernard Cornwell's style of writing I just had to get this audiobook. Alas, there is one problem - and I readily accept it may just be me - but Mr Frederick Davidson has a strange twang in his voice which can be distracting. That said, a great story which clips along...

listen to the clip before ordering...

I've learned a BIG lesson here by not demo-ing the book before ordering it. It is truely awful and I've had to give up, as I simply can't bear the sound of the narrators voice - I'm sure the story is great but I just can't get past his odd delivery and strange intonation at the end of pretty much EVERY sentence. Surely somone in the recording studio could have pointed this out early on...

Never read/listened to anything like this before so was dipping my toes in the pool as it were.

Pleased to say the story did not disappoint, a sweeping saga of pre-historic man achieving unbelievable goals.

Have to agree with David though; the narrators voice took some getting used to a little too Leslie Phillips for my liking, but don't let that put you off, very good and highly recommended.

Ruined by a dreadful narrator

I did not think it would be possible to render a story by Bernard Cornwell, a master storyteller, boring but this narrator has pulled it off. Driven to despair by his flat, toneless, emotionless, upper-class drawl, I have had to give up. Very, very disappointing.

Absolutely love this author, but what a mistake this was. I downloaded the book on the basis that I really like the author and have been delighted with many of his others. Tha narrator sounds like Kenneth Williams apart from when he is reading a character - he then sounds remarkably like a darlek. I cant bear the sound of his voice any more - its terrible. I've tried 3 times and now have given up. Cant comment on the storyline as I've never got to the end.

Shame about the reader

I've tried three times now to listen to this book and just can't do it. The reader's voice is so unpleasant. He sounds bored and incredibly supercilious as though he dislikes the book. Such a pity - I was really looking forward to listening.

Though apposite comment has already been made regarding the narrater of this Audiobook (most particularly by Sarah of Chelmsford in my view) it is worth reiterating, since Davidson's narration is so appalling as to render this Audiobook unbearable.

A huge disappointment for Bernard Cornwell fans such as I and no place to start should you be dipping your toes into BC's remarkable body of work, or indeed into Audiobooks per se.

Would you try another book written by Bernard Cornwell or narrated by Frederick Davidson?

I love Bernard Cornwell books but would definitely not try if read by Frederick Davidson, his voice is condescending and annoying to listen to, so much so that I can't finish this book which might be a great story. I will probably never know.

Don't know didn't get very far into it.

His voice is condescending and monotonous with an odd inflection on each sentence. I will avoid any other books read by him

I will attempt to get my money back on this purchase as I know I will not bring myself to try again listening to it and when I asked my partner to try it, he is of a similar opinion

I thought this is a very good book but it is the first ever one I have had to stop listening to as the narration was so annoying. Sean Barret's version is much better!