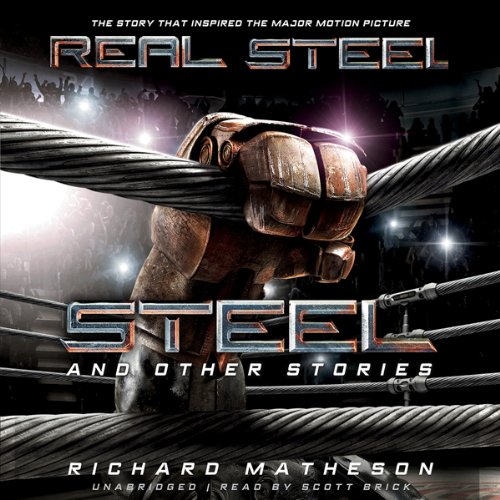 Steel and Other Stories

Soon to be a major motion picture starring Hugh Jackman, here is a new short story collection by the New York Times best-selling author of I Am Legend.

Imagine a future in which human boxing has been replaced by heavyweight bouts between massive robots. Richard Matheson’s classic short story, “Steel", is the inspiration for Real Steel, a new movie starring Hugh Jackman.

“Steel” is just one of over a dozen unforgettable tales in this outstanding collection, including a satirical fantasy, “The Splendid Source", and two new stories never before collected in any previous Matheson collection.

Yes, Richard Matheson is the author of the novella that eventually became I am legend. Yes, he is the man who wrote several Twilight Zone episodes. To many, he stands out as one of the greats. I likef his stories very much, but I did not love than. To his stories I want to say, "It's not you; it's me." I love twisty. I absolutely adore Twilight Zone. Truthfully, I have seen so many of those episodes and read his short stories, that they did not feel fresh. I wanted to be thrilled and shocked and surprised, but we have been together too long. I'm sorry, baby, but the mystery and magic is gone. I would never be the sort of cad that would put you down. If you haven't been here, you may find out wonderful. If you read a lot of this sort of stuff, you will not likely be fooled by the twisty ending to these stories.

I didn't like Scott Brick do much. His reading in many places felt over acted. There is something about his manner of acting out the emotions of "pleading" that I found annoying. His "anger" is very much the aging Shakespeare actor preening and proud. I think a light touch to this material would have improved the irony.

NO BEAUTY PARLORS
The title story STEEL, was a Twilight Zone episode. This is longer. The abridged version was better. I did not get to see the movie with Will Smith. Of the 15 stories only one was bad. The problem with this collection, is that most of the stories are just so-so. Not bad, but not great. The collection is also listed as a horror, when it is more a collection of Science Fiction. There are robots, time travel, a western, nuclear bombs, a doll that talks and grows older and much more.

Brick is to narration as William Shatner is to Star Trek

If you love Matheson, you will want the collection, if you are new to Matheson, get I AM LEGEND or one of the many Twilight Zone episodes he wrote.

Matheson always hits it out of the park

What made the experience of listening to Steel and Other Stories the most enjoyable?

I've always loved Richard Matheson, ever since I first picked up Hell House more than 15 years ago. Ever since then, I've read everything of his I can find, even rare and out of print titles. Matheson is a better writer than 99.9999% of all the authors writing in the horror/thriller genre today. As far as creating believable characters you can come to care about, adding details that truly make the story come alive, and having a keen sense of human nature, the only author who I feel comes close today is Stephen King, though their writing styles are widely different.

Steel, the former prizefighter in the first short story. He's a dreamer who still believes that if they win the next fight, book the next match, try the next town, he'll make it big. He believes in the run down fighter he's managing to such an extent that he refuses to see reason. When his fighter ends up unable to compete right before the match that will provide money they're absolutely relying on, he decides to take his fighter's place, despite having not fought in years and knowing there is no way he'll ever win the match and may not even survive against his opponent.

The scene in which Steel, facing the fact that his fighter is too run-down to compete, decides to step into the ring himself. He shows a great nobility there, knowing his partner is depending on the money from the fight. It's an amazing scene, handled with an expert observer's razor-sharp sense of human nature, emotional without being soppy. It's at this moment where I found myself caring about Steel the most.

If you could rename Steel and Other Stories, what would you call it?

Not my cup of tea, but brilliantly read.

While Matheson's work, specifically his shorter works, are not my personal favorite, they are stunningly written and very moving tales, and Scott Brick's reading is, as ever, flawless. I know this will be a must for Matheson devotees.

These stories are great and yet written so long ago. Unnerving, delightful, and well read all the way through.

Im righting this review about 6 months latter and I can't remember a single story in it. Guess that says a lot about it.