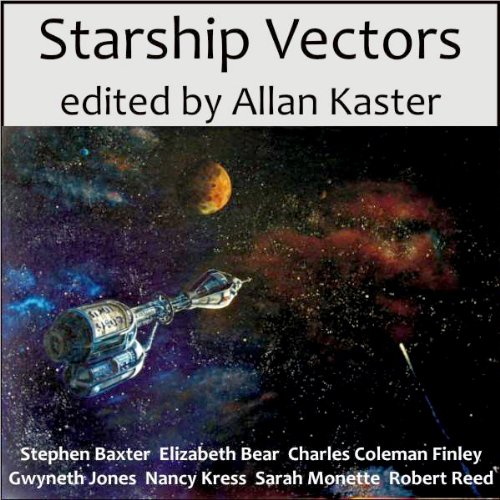 Those aboard the Mayflower II are determined to be the first generation ship to successfully reach another galaxy in a story ( Mayflower II ) by Stephen Baxter that takes place in the Xeelee universe. In Boojum, by Elizabeth Bear and Sarah Monette, space pirates are on the prowl for booty aboard the living starship, Lavinia Whateley. In The Political Officer, by Charles Coleman Finlay, the crew aboard a military starship must contend with both the enemy and a political officer. In The Tomb Wife, by Gwyneth Jones, the navigator of the interstellar freighter, Pirate Jenny, hears a ghost from an alien tomb in its cargo hold. Two competitive physicists aboard the Kepler use uploads of themselves to probe the scientific mysteries of radiation-rich space in Shiva in Shadow by Nancy Kress. A wealthy woman explores the lives of the less fortunate aboard a starship larger than Earth in Robert Reed's The Remoras, part of the author s ongoing Marrow series.

two 4 stars, one 3 star and three one star

These are more novellas then short stories. Robert Reed can always be counted on for above average stories, would like to see some collections of his in audible. Elizabeth Bear and Sarah Monette start the collection off with a pretty good story. Kress's Novella is really long and really boring followed by bad stories from Finley and Jones. Mayflower 2 by Baxter was different and entertaining. I would not suggest to any of my friends to buy this and listen to the three long boring stories in it, just to hear the three good stories.

Where does Starship Vectors rank among all the audiobooks you’ve listened to so far?

This collection ranks rather high, especially since I am quite partial to hard science fiction.

My favorite story would have to be Mayflower II. I have to admit that I am biased toward aloof musings on extreme time-frames, as Stephen Baxter tends toward in his Xeelee sequence.

The performances were not strictly Tom Dheere's, each story had a different narrator. Though, overall, I feel they all did quite well, and that the only failing was in the story itself.

I intensely enjoyed the fact that the flow of Mayflower II was very turbulent. Baxter mixed large chunks of exposition with occasional interactions with the environment.

To be completely honest, I tuned out just about all of Tomb Wife and The Political Officer; they just did not engage me. But, I will not condemn the overall collection based off of just two stories.

I really enjoyed most of the shorts in this book. I really liked Kress' "Shiva in Shadow", followed closely by "The Political Officer" and "Mayflower II". The only reason I do not give this a five is for "The Tomb Wife". I enjoy short stories as a break from full novels, the format gives both author and reader a chance to explore new areas.

The first story about a "generational" starship on a multi-thousand year voyage and the huge changes onboard was especially good. Short stories are great--there are always a couple that don't hold your interest, but the whole book can still be fantastic!