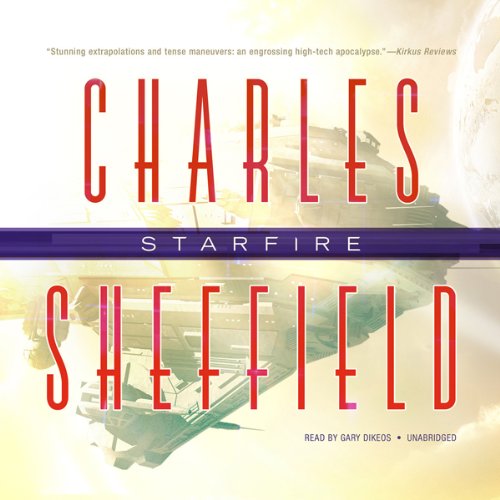 Earth has been ravaged by galactic disaster - but the real devastation is yet to come.

The end draws nigh….

The year is 2053, and Earth has barely recovered from the Alpha Centauri supernova that destroyed much of the planet’s infrastructure. Now the supernova's residual effect - a storm of high-energy particles - is racing toward it, and an international effort has been launched out of the Sky City space colony to save the planet. But the controversial plan to build a giant protective shield is falling dangerously behind schedule. A series of unexplained murders has disrupted the Sky City workforce, so much so that a brilliant but monstrous criminal has been enlisted to track down the Sky City killer.

Then more startling news arises. Evidence indicates that the supernova was deliberately engineered and that the lethal particle storm will arrive sooner than anyone expected. But who—or what—tried to destroy the Earth? And will the answer come in time to save it from its final apocalypse?

Would you be willing to try another one of Gary Dikeos’s performances?

First of all, I am a *big* Charles Sheffield fan. I love his work so I was looking forward to listening to this book. That lasted right up until the first female character was voiced. The narrator uses variations on a 1930's Brooklyn housewife accent for his women. The president of the United States, astronauts, financial executives, high powered company directors, all have the same early 20th century New York working class accent. It doesn't work as well as you might think.

Starfire is set 27 years after Sheffield’s novel Aftermath. In Aftermath, an exploding Alpha Centauri goes super nova. The various particles knock out all the electronics on the plant. That novel has all the moving parts, it threatens returning Mars Explorers, there is a rival boiling within the survivor group, person interest, political intrigue, and a dash of implied sex. I gave it good marks. At the end of Aftermath, we learn that the old second shoe is going to drop and threaten Earth in about fifty years. And, oh no, no one can quite figure out why Alpha whent all ballistic – it was supposed to be impossible – I smelled a sequel. Enter Starfire.

Through some prestidigitation, there is a life extending medical therapy (side issue) that allows numerous characters from Aftermath to be back in the saddle for Starfire. Some of our old pals are back like Oliver Guest, the serial murdered of 14 year old girls. Sheffeld actually does a great job making Guest into a sort of perverted hero – go figure. Anyway, there are solid new characters and the story is gripping and holds your interest. If you liked Aftermath, then you’ll like Starfire.

One negative note, Gary Dikeos is AWFUL. Sheffeild, dude, you need to get another narrator. His voices are terrible. He makes one of the principally powerful women sound like a cross between Minnie Mouse and Betty Boop. I have a hard time taking her character seriously and she is an important character.

So if you can get by the narrator, I think you’ll like the story. It appeals to all age groups and does fit nicely the sequel. Give it a read.

The narration really doesn't do any justice to the book.

Was Starfire worth the listening time?

Will return based on poor narration.

Would you try another book from Charles Sheffield and/or Gary Dikeos?

No way Jose! the first book wasn't bad but this one focuses to much on pedophile behaviour, damn can't you perverts just write a story, without getting all lathered up.

Would you ever listen to anything by Charles Sheffield again?

Who would you have cast as narrator instead of Gary Dikeos?