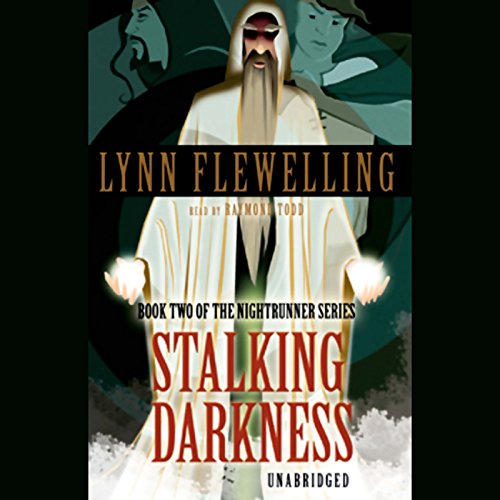 A master of subterfuge, a rogue thief with a noble air, Seregil of Rhiminee has taught his young protege, Alec of Kerry, his greatest secrets of the trade. Together they've made their way with thieving jobs large and small, winning friends and enemies, their lives in constant danger and yet charmed by an aura of magic, friendship, and trust.

But now, as their adopted country prepares for war, Seregil is called away by the ancient wizard Nysander to face the ultimate challenge of loyalties and entrusted with a deadly knowledge that, if breached, could cost both Seregil and the unwitting Alec their lives. And as Alec learns the shocking truth of his own shadowed heritage, he, Seregil, and a handful of loyal companions are catapulted into a tumultuous conflict with the ultimate evil, in which magic alone may no longer shield them from harm.

Darker than the first book, "Luck in the Shadows" - which you should definitely read before starting this one! - this was quite an immersing read.

With Skala preparing for war with Plenimar - a war that continues into the next book in this series - "Stalking Darkness" illustrates just how evil the enemy truly is. While it's not especially graphic, I found a couple of parts a bit too much for my imagination and had to (briefly) skip forward.

I started the series with some hesitation after some reviewers of the first book complained about the "sex scenes"; assuming you've read the first book, you'll know what an exaggeration THAT was! There's a bit more "nookie" going on in this book, but I don't think it amounts to more than what one would see in a PG movie. Or prime time TV, for that matter.

I've had a growing pet peeve with the last several books I've read, so I also need to add that this book does not suffer that same annoying fate; thank you, Ms. Flewelling, for writing a decent ending! If you've ever invested 25+ hours to read through a series only to have the ending last a disapointing 30 minutes or less, fear not! Although I definitely plan to get the next book (Traitor's Moon), Stalking Darkness wraps up the first two books with an ending that makes you think "Oh, well that's alright then."

Audible.com doesn't have "Traitor's Moon" yet, but with both the first two books just coming out this year, I'm hoping the third book is not far behind!!!

Lynn Flewelling continues to take us on a highly enjoyable ride with this second installment of the Nightrunner Series. Many things that were set up in ways large and small in the first book come to exciting conclusions and many more are set up for future action and intrigue.

Again, Raymond Todd is an acceptable reader for the series, but in no way a great one. His efforts are classically appreciable, but don't quite feel right for the series and setting.

Repeating from my review of the first book: Up front many reviewers have spent time on the fact that this series features a romantic relationship between two men. This is true, but it is far from the focus of the series. These books are accessible to anyone. Despite what other reviewers have alluded to, there is absolutely no explicit sex in this entire series. A range of human experience is presented, include love and desire, but always in a tasteful and very easy to relate to fashion.

I was wary of this series because of some comments by other reviews specifically regarding the "gay" theme of the novels, however, it was very tastefully done, and you actually find yourself wanting the relationship to succeed. The story itself is engaging and truly entertaining, you find yourself liking the characters and there are more than a few laugh out loud moments. I myself appreciate long stories because I get attached to the characters and the story and I don't mind the stretch over several books. While not as good as George RR Martin's series, it is an enjoyable, uncomplicated read. I also liked the reader, despite his limited voices. I think him perfect for the story. To me, the simplicity of the story verses Martin's does not warrant a complex variety of voices. Hope this helps!!

Great listen. I really ejoyed the characters, hero's that don't see themselves as perfect. The adventures were filled with the tension of doubts and fear and the excitement of success. This is one of those stories that I was anxious to find out what happens at the end, yet reluctant to finish because my adventure would be over and the next book is not available yet. I REALLY hate not wanting to finish a book because it was so good!! I'll take this kind all the time...

The story and performance are great, but the narrator pauses and takes an audible deep breath at the end of each page (you can also hear him turning the page) a small thing overall but at times it really took me out of the moment.

What a magnificent read! This was yet another amazing story told by one of the best authors I have ever known. I feel so lucky to have come across this series. Its a wonderful adventure and escape into a layered story of love, gender, sexuality, and faith.

This book has an amateurish feel like the first in this series. The first half is rather dull, with little happening, except for the syrupy love story growing between the two male leads (yes male, and considering the pages and pages spent carefully setting it up, the author must be making a statement here). There are brief bursts of action but the protagonists quickly resolve them. The book at this point feels more like a showcase for the characters and setting.

Once the main threat comes in and the real adventure gets going (about the halfway point) the book clips along well. I found the second half of the book hard to put down. The ending is somewhat predictable but satisfying nonetheless, however the denouement goes on far too long with the resolution of the syrupy love story.

The prose is good overall, but the author uses many fantasy cliches. Not much original in the dialogue either. The characters on the "good" side are excellent and well drawn, but the characters on the "bad" side are simply evil with no redeeming qualities. This is not an issue in fantasy but some authors (e.g. George RR Martin) have been making their villains more three dimensional, which makes the conflicts more interesting. The setting itself is terrific, with a rich background and history, and there are less infodumping problems than in the previous book. I kept thinking this book was rushed through editing. Spice up the beginning and shorten up the ending, cut some of the cliches out of the prose and dialogue, and this book would have been much better.

The narration is adequate. The narrator's voice is clear but he only has two real voices for the characters. This is not a problem, I'm just rating him against some of the excellent narrators I've heard recently who have a unique and convincing voice for every character.

There were many points during this book where I was practically biting my nails wondering what on earth was going to happen next! Amazing series, amazing book! So wonderful to listen to! I love this series!

This is probably the high point of the Night Runner series. The story and plot had every element of high fantasy that you could ever want

Still the Best of Stories

The sequel doesn't disappoint - but then again, I didn't expect anything less from Ms. Flewelling.

An excellent and subtle romans with an exiting adventure, charming characters and a heart warming end.