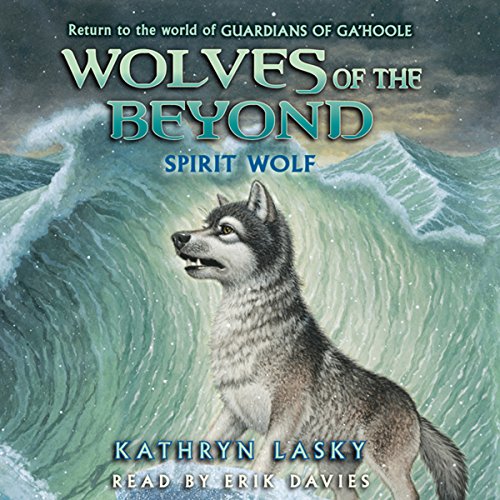 Faolan, a wolf once doomed to die, struggles to fufill his destiny as the leader of the wolves of beyond.

No one ever saw Faolan as a leader. Banished as a pup, he survived and returned as a gnaw wolf - the lowest member of the wolf pack. But Faolan wasn't meant to be a gnaw wolf. It's not just his strange, splayed paw, or his uncanny connection with the bears. There's something about Faolan that inspires certain wolves...and leaves others deeply suspicious.

Now, with a dangerous threat on the horizon, the pack must make a choice. Will they trust the silver outsider with the task of leading? If Faolan can't fulfill his destiny, it could be the end of the wolves of the beyond.

I quite enjoy the book and its series

For every end, there is a new beginning. This is what Spirit Wolf felt like to me. With everything that happens throughout the plot, and with everything that changes, it seems as though Kathryn Lasky has concluded the first leg of Faolan & company's journey, while at the same time, clearing the slate, so to speak, for the upcoming installments of the series. A lot of loose ends get tied up in this story, as do a lot of questions get answered, but at the same time, like any good story series, new questions arise and plot twists thicken.

The pacing of the story was one of the best in the series thus far, in my opinion, yet for how much occured within the pages of the story, it felt like the story arc didn't progress quite as much as I would have expected. Still, the experience was most enjoyable, the writing very well done as usual, and as always, I can't wait to read what happens next. Definitely worth a read, especially if you enjoyed the previous four installments of this series.

Erik Davies does his usual narrative, which is great most of the time, yet still could be a little better. No major complaints from me though.

One of my favorite series!

I usually read the actual books, but I don't have money so I had to use the audio book. It's still really good series.

This series is a very good one! I love listening too it. The book is performed very well and I suggest it for around 8-13. Enjoy😎

On the whole, I like this series... but this particular volume didn't really speak to me. I'm a fan of "furry fantasy" - but not a fan of dystopia, so this book, where the world literally crumbles at the main character's paws, didn't score high on my list. Add to that a focus on the very real death and carnage of a major geologic upheaval, and some parts are genuinely grim.

Erik Davies does a good job with straight narrative, but I find that his voices can be a bit inconsistent from one book to another... the wolf Heep, for example. If the story were stronger - as the past volumes were - I might have not noticed so much.

I'll stick with the series because I'm a huge wolf fan - but I'm hoping that this was an anomaly in an otherwise sound tween fantasy series.