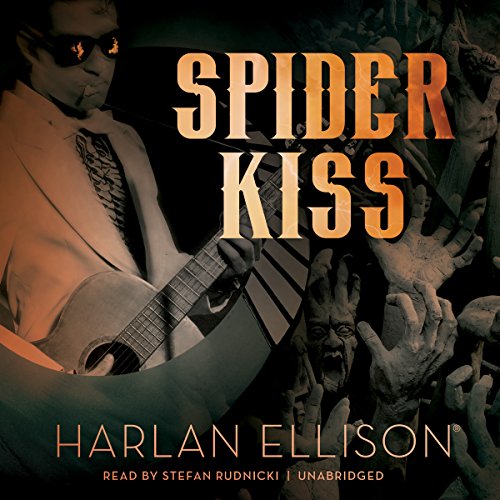 From one of the most highly celebrated and dynamic American writers of our time comes Spider Kiss, Harlan Ellison's electrifying novel of the early years of rock and roll.

If you think the only thing Ellison writes is speculative fiction, craziness about giant cockroaches that attack Detroit, or invaders from space who look like pink eggplant and smell like chicken soup, this dynamite novel of the emergent days of rock and roll will turn you around at least three times. No spaceships, no robots, just a nice kid from Louisville named Stag Preston with a voice like an angel, seductive moves like the devil, and an invisible monkey named Success riding him straight to hell.

This is a fable

If your looking for a story that’s cut and dry aka a Hollywood style story you won’t find it here. It’s dirty it’s nasty it’s ugly and it’s great.

Not My Favorite of Ellison's Work

I'm a big fan of Ellison's speculative fiction, and this ended up disappointing. It's a pretty standard raise to fame/fall from grace story, and I didn't get much out of it.

Mostly, I just wish Audible would get the rights to the Voice from the Edge collections.

I cant listen to this voice

I want to listen but cannot get past the narrator's voice. Too deep, almost scary. He would be a good character voice but not the narrator of an hours-long book. myvrating for the story would better be described as NA because as noted, I can't listen to it.

phenomenal, never read a book like this. picked the right narrator. this book reaches into your soul

Harlan at his most Analystic

Stefan Rudnicki brings to life a story full of raw edges and conflict; smoothly and with gravitas.

Tug at your heart strings while simultaneously being filled with disgust over the human condition. within us are contained the seeds of our own destruction.

Harlan Ellison speaks in introduction to a work of Truth about humanity, in a story that never happened, but that is based on a true story. The story of human beings clawing for their moment in the sun is a quest for an end to personal suffering.

That Harlan Ellison can write well should come as no surprise, but I’d only been exposed to his sci-fi before. Thinking that I’d like to listen to some of that genre, I searched for him and found this.

Spider Kiss is un-put-downable if it were a book, and a continuous source of delight to listen to. The narration is top class by Rudnicki, evoking a 60’s detective film noire with grit and humour. But the prose steals all the prizes, forces one to laugh out loud with elegant juxtapositions, sharp perspectives, and with deft wordplay and deep insights.

Written in the early 60s, it would not be surprise me if it directly and indirectly influenced the wordsmiths on the film “Amadeus” - if you know that film and buy this audible, you’ll know precisely what I mean when you hear it.

This is a truly excellent novel. Brilliantly written and excellent performed. The story, characters, setting and plot are all beautifully communicated.