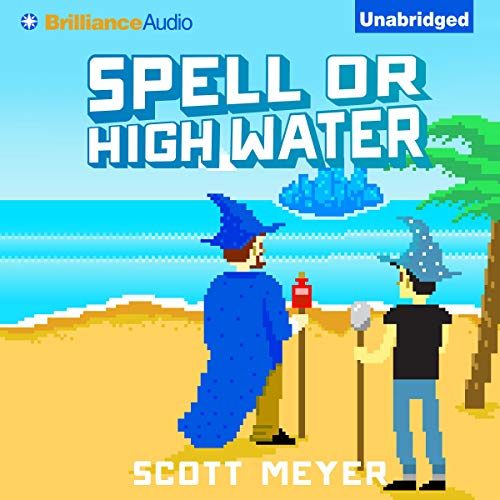 The adventures of an American hacker in Medieval England continue as Martin Banks takes his next step on the journey toward mastering his reality-altering powers and fulfilling his destiny.

A month has passed since Martin helped to defeat the evil programmer Jimmy, and things couldn’t be going better. Except for his love life, that is. Feeling distant and lost, Gwen has journeyed to Atlantis, a tolerant and benevolent kingdom governed by the Sorceresses, and a place known to be a safe haven to all female time-travelers.

Thankfully, Martin and Philip are invited to a summit in Atlantis for all of the leaders of the time-traveler colonies, and now Martin thinks this will be a chance to try again with Gwen. Of course, this is Martin Banks we’re talking about, so murder, mystery, and high intrigue all get in the way of a guy who just wants one more shot to get the girl.

The follow-up to the hilarious Off to Be the Wizard, Scott Meyer’s Spell or High Water proves that no matter what powers you have over time and space, you can’t control rotten luck.

Luke Daniels is prolly one of the best voice actors I have heard. His voices make this series even better than it already is.

Honestly the book was so boring. The journey to Atlantis was so so and along with the uninteresting mystery make the book very boring. Martin became secondary in this book or should I say no focus on who was the main character or who story was being told. It just so random. The first book have a dumb smart but also funny story, but this have a dumb not smart and not very funny story. Even Roy the character who appear in the beginning for Martin to train was irrelevant to the story. Disappointed!!!

This is the second book of the series. The first one was okay, the main idea was neat, although the characters were not too complicated.

This book continues just after the ending of the second book. Unfortunately, both the complexity and the logic of story are very poor. The characters have an identically childish behavior; most of the main characters mostly react to any situation with adolescent rage. The character motivation behind the plot is like that of a 5 year old child.

In my opinion, the first installment was worth too read or listen to, but this second one was quite painful to finish.

KILL ABILITY
IF I SAY IT, AND YOU KNOW WHAT I MEAN, THAN IT'S A WORD
In the introduction, we are told that this is to be considered funny and light hearted and not to be taken serious. Which I believe is a great intro to this series. If your looking for some serious Science Fiction or Fantasy, for something dark or mentally challenging, than your in the wrong place. This is the second book in the series and you will be lost if you do not start with the first most excellent book (OFF TO BE THE WIZARD).

SMART PEOPLE DO STUPID THINGS
While I did not enjoy this as well as the first book, (which is not unusual for any series), I still enjoyed it and it was well worth my credit. In places it is extremely funny. Most of the book takes place in Atlantis, which is a pretty cool place to begin with, especially since it is a society run by women. The male attendants are especially funny. I will say that they stayed in Atlantis too long and the whole plot there started to wear thin. That is after several very funny chapters, though. The whole thing with the Brits also got a little old.

ARGUING WITH A DUMB PERSON NEVER WORKS
The side story involving an exiled magician and the FBI agents, turned out to be some of the funniest stuff in the book. Agent Miller is hilarious. I already have book three in my library and I am looking forward to listening to it.

Luke Daniels does a fantastic job. He makes the listening of this ten times better than the reading of this.

Would you listen to Spell or High Water again? Why?

Yes, but I'll give it a few. Got to keep the story fresh. This is an easy listen with a funny storyline and likeable characters.

The whole Atlantis thing - 100:1 male to female ratio and the whole women wear the pants scene while the guys are fired up to clean and get their hair done. Different take on roles makes the story funny in a kooky way.

What does Luke Daniels bring to the story that you wouldn’t experience if you just read the book?

Luke Daniels is a flat out pro. He made this book flow. I bought Spell or High Water this morning and just finished it - almost 11 hours of audiobook and I feel refreshed. The author made the right choice in hooking up with Luke Daniels.

Is Martin up to the challenge of winning Gwen's heart? Stay tuned to see what gets stuck in Martin's mouth - Gwen's tongue or his foot!

Get this book. The price is right, Luke Daniels comes up strong and Philip wakes up next to an "untraditional" vixen and doesn't even think about pulling a coyote.

all common sense has left

while I liked the first book despite obvious flaws of common Sense the second book departed it completely. if people do not act as a person would then it breaks all emmersion. it's like writing your common IT nerd loves taking a hot poker to his face and everyone else does. I could list specific examples but sometimes it's best to just let it go.

Author takes a very unrealistic idea and creates a world based on it and does a very good job at it.

Hilarious even more than the first

Could not stop listening to this book. The story is pretty funny even though it a bit expected but the arguments that the characters made and the reasoning is hilarious.

I can't rave enough about how much I enjoyed this audiobook and the first one in the series - Off to Be the Wizard. It's smart, funny, clever, and stimulating without being the least bit depressing or dour. I realize that some people are convinced that quality in writing can only be attained with deep, dark, soul clenching grit and human misery, but they're wrong. There is a huge value to something that engages your mind, AND makes you smile. On top of that, the narration is brilliant and adds so much color and humor it ought to be classified in its own category. Luke Daniels is an elite level audiobook narrator. I just bought book 3, and will eventually purchase Meyer's latest book too.

Listened to this during impeachment.... Squid Pro Quo. lmao

you should listen to the series.

Back to being a professional wizard

The second book in the Magic 2.0 series sees our Wizards moving to Atlantis. Atlantis is a place run by women, who are called sorceresses. Males are relegated to servants who live the good life in return for sexual favours (or, that's how it came across to me).

This follows the similar style of writing and humour from the first book. Unlike the first book, there are two story threads. The first are the Wizards in England/Atlantis and then there is Jimmy's story (the same one from the first book). Both are enjoyable, but Jimmy's is a little predictable.

Atlantis has Brit the Elder and Brit the younger - basically the same person occupying the same time. This then leads on to a lot of Time Travel story lines, which is the main plot for this book.
The reason for the plot was a little weak to me, but the journey was fun so I can let that fall.

The audio again was brilliant.

A less intense, more fun take on the Matrix...

Loved the first book and have enjoyed the second in the series, although the story line was less appealing to me in the second book. Easy listening with a few laughs and a good dose of cleverness. If you're after something heavy and wrinkle-inducing, it won't be this, but hey, we all need some levity from time to time and this fits the bill for me.

2nd in series, 1st is stronger IMHO but it's great to meet up with old characters that feel like old friends and hear more about there world, very enjoyable nonsense. Heading for book 3 right now :)

Second book in the series, very funny and I'm no expert but think they are well written.
Luke Daniels does such a good job, his English accent could do with some work but he really does do an excellent job at helping you to visualise all these characters. He injects light and shade into the reading and I'm really impressed.

more of the same

...but that's a good thing. Excellent narration as usual and a decent plot (though Jimmy's arc felt like a bit of a misfire). It's not as strong as the first in the series but it is fun, with plenty of laugh-out-loud moments.

I must have listen to this series at least 8-9 times anytime if I want entertaining this is the book I turn to.

What did you like most about Spell or High Water?

The concept behind this book is just great.

What was one of the most memorable moments of Spell or High Water?

Fantastic and Funny Fantasy!
Meyer's intriguing concept and enjoyable writing makes this second installment as great an experience as the first.

Luke Daniels attempt at a Norwegian accent still hurts my ears and my national pride. :-)

If you could sum up Spell or High Water in three words, what would they be?

A really interesting story with lots of humor. Well written and well read. A surprising theme and I'm surprised I enjoyed this so series so much. I do like some of the concepts / engineered solutions

That would be a waste to sip at it to make it last longer, in my view is the best approach.

I love the humour of this series. The narration is fantastic. looking forward to the next book.