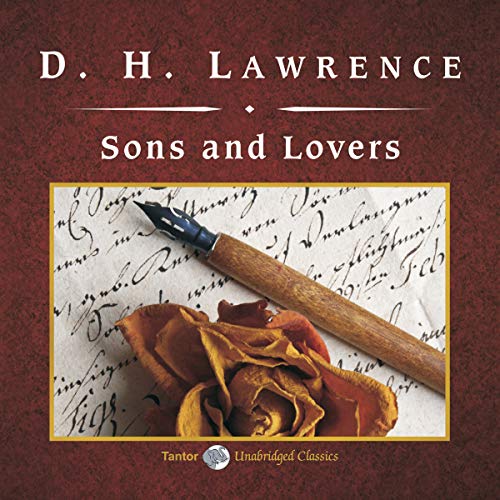 Sons and Lovers, D. H. Lawrence's first major novel, was also the first in the English language to explore ordinary working-class life from the inside. No writer before or since has written so well about the intimacies enforced by a tightly knit mining community and by a family where feelings are never hidden for long.

When the marriage between Walter Morel and his sensitive, high-minded wife begins to break down, the bitterness of their frustration seeps into their children's lives. Their second son, Paul, knows that he must struggle for independence if he is not to repeat his parents' failure. Lawrence's powerful description of Paul's single-minded efforts to define himself sexually and emotionally through relationships with two women---the innocent, old-fashioned Miriam Leivers and the experienced, provocatively modern Clara Dawes---makes this a novel as much for the beginning of the 21st century as it was for the beginning of the 20th.

Lawrence is a great novelist and seems to have told a tale no truer than in his autobiographical "Sons and Lovers." The primary characters all have some major defect of character, but I felt most pity for Paul Morel (the Lawrence character) and Miriam (his childhood semi-sweetheart). Momma Morel didn't like Miriam because Mom would then lose control over Paul. And Paul could never let go of Mom's strings even after she'd died.

A novel best illustrating the dangers of a parent frustrated in his/her own life and then attempting to control the life of his/her child such that the parent ruins the child's life too (not only in love but in career and in joy).

Simon Vance does an admirable job narrating. The book is free on Kindle and once you download that, the audiobook is only $0.99. A super deal.

Where does Sons and Lovers rank among all the audiobooks you’ve listened to so far?

I gave this book a five rating because I injected my assessment of it with a healthy dose of subjectivity. In this instance, I liked the book, I connected with it. I mean that it really resonated with me. Otherwise I would have given it 4.5 stars. But here's something objective. Whilst Lawrence is usually remembered or known for his mooning and swooning excerpts, these sorts of narrations really only comprised 2-5% of Sons and Lovers. The rest of the book was a very strong narrative, very well detailed and compelling, much in the vein of Tolstoy and later Hardy. Lawrence wrote wonderful narrative. Another startling and objective fact about the book was in the way it was read by Simon Vance. Simon gave the story a dimension I wouldn't have thought of, and it was a powerful and deserving dimension. Till now I had interpreted Paul Morel as being a 'moony' overly sensitive mother's boy. And he is such in many ways. But Simon brought a manliness to the character that gave the character and the story real street cred. I quite connected with this story. I found similarities with it in my own formative years, mostly around the town community, the industrialized nature of the town, the opportunities that were available for succeeding generations, being Paul's and his siblings, which history doesn't always make available, contrary to our beliefs in a progressive society ever present, and, yes, even in the relationship Paul shared with his mother. There came a point in the story when I felt like telling Paul to get a hold of himself. But until that point I felt like Lawrence was exploring something universal in a vast proportion of mother son relationships. A good story, in the sense of a good yarn, in places a little like a memoir, and dimensional in terms of the characters and the themes explored in poignant but not over weening sections of the narrative.

Perfect narration, but what is Lawrence really doing?

Considering that The Rainbow and Women in Love are about lesbian love, and considering that homosexuality (primarily male) was still punishable with imprisonment in England in the 1950's (we learn in the film The Imitation Game), one must consider that Lawrence was attempting to depict a cause for male homosexuality. Then his characterization of the overbearing mother, though a good portrayal, is a gross oversimplification.

As for narration, Simon Vance has a different voice for each character, easy to discern, and even different voices for Mrs. Morel as she ages. Indeed, this narration makes listening a pleasure, even for those who aren't extremely fond of the novel.

Lawrence is a competent stylist with an extreme penchant for tedious repetition of what he just showed again, yet again. The novel is burdened with extremely drawn out rumination over the war between the love for his mother and a women he doesn't love. He paints Paul Morell as a closet case who takes far too long in realizing the obvious. Painfully uneventful and trivial plotline without the needed respite of high flourishes, metaphor or philosophic reflection. His psychological penetration and social reflections are not to scoff at but they could be condensed into 125 pages. The work is unduly praised without due merit. Simon Vance is a first rate narrator, but even he can't improve upon a wanting text.

These excellent prose loosely follow the life of struggling artist growing up in an English coal mining town of Nottinghamshire with a strong loving and involved mother and a rough, disillusioned, alcoholic, and uninvolved father. The later parts of the book seem quite autobiographical, while the early book seems more fictional, more novel like, and less focused on the artist’s character. The author pacts a lot of essential truth into this novel. The characters all feel deeply real, with all the inconsistencies, self-compromises, vagueness of memories, and vacillations of real humans. The author seems fair to all the characters portrayed (which is a common defect of autobiographical novels). The novel does not have any action to speak of, no adventure, little philosophy, just a story about real people living a real life, and that is enough.

The narration is very good, handling the dialect particularly well.

This is a new favorite.

Awesome book for anyone to listen to. The narrator kept me engaged throughout the story.

Extremely boring and pointless story. Not sure if it's a classic, but I did not get anything from it. Quite flat in most areas.

A view into Lawrence’s psyche?

Overbearing themes of male commitment issues. The protagonist Paul had an emotionally incestual relationship with his mother. And two of the boys, clung to women the had love hate relationships with but blamed the women for a lack of commitment. I think Lawrence had some serious issues with women, and his mother perhaps?

Great parable on a mother's influence on boys exploration of masculinity and romance. The narrator is great and fits the deep tone of the story.

A good reading of Lawrence classic unabridged. Locations come to life . Characters and dialogue well delineated by the narrator. I would recommend this.

I have struggled to read for years. Haven't made the time; waylaid by TV, internet, life, hobbies. I generally fall asleep after a page of effort.

I've sat, deperate, staring at a pile of books that I've wanted to pick up and experience each individual journey within.

I recall enjoying read alongs in the classroom of my school; Under Milkwood, Kes. I decided to relive the experiences by using audiobooks to guide me along. It worked a treat. This may be life changing!

A mesmerising story with tragedy that took my breath away at times. So well read. I got used to Simon Vance after about a third of the way through the book, initially annoying, but the pace was perfect.

I shan't forget about the Morels.

Absolutly fantastic read. Wonderful depth to the characters without slowing the pace of the story. You get a real feel for what life was like in a mining town at the turn of the century. Basically terrible. All the characters are so real and you feel as if you really get to know them and understand them. This is my first D H Lawrence, it will not be my last. The narration is spot on, strong, understandable accents.

At the start of the book I was taken with the writing which is excellent throughout and the description of a Nottingham mining village. By the end, I was desperate for it to end and probably won't try another DHL. I didn't like any of the characters and found the endless agonised soul searching mawkish - it reminded me of Dostoyevsky's Bros K. So, not to my taste.
The production and reading were faultless. Vance manfully waded through the accents and the anguish, and only slightly faltered in doing the children.

I read the paper book years ago and it touched my heart. It still is a favorite book of mine and the interpretation is superb. The ending is one of the most intense pieces of literature I know, and a beautiful depiction of the immensity and loneliness of the human condition.

One of the best titles ever

It’s all in the title; the complexities of gender, love, social roles and the pain and joy therein. I read this book when I was fifteen and loved the emotional intensity, the descriptions of family life, landscape, class and gender. Nearly fifty years later I re-read it and Lawrence’s writing felt just as fresh and perhaps even more relevant.

Has Sons and Lovers put you off other books in this genre?

It has put me off books by DH Lawrence

Would you listen to another book narrated by Simon Vance?

He's ok, not one of my favourites

So dull I couldn't finish it.Although I felt pity for most of the characters, the book didn't inspire me to like them or feel interested in them.The descriptions of life in a mining family, while no doubt accurate, were pedantic and uninspired.The writing itself is poor quality. It is a mystery that he is such a famous writer.Please don't think I have a low attention span or lack interest in the subject matter. I found The Road to Nab End fascinating both as a story and for its insight into the hardship faced by the working class a few generations ago. Even How Green Was My Valley, and No Mean City, were just as educational as Sons and Lovers and more interesting to read.