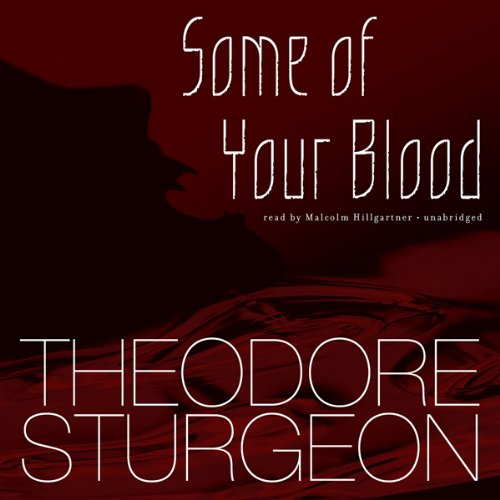 Named one of the Top 40 Horror Books of All Time by the Horror Writers Association, Theodore Sturgeon’s dark and foreboding look at the vampire myth was an instant classic when it was originally published.

Army psychiatrist Philip Outerbridge receives a confidential folder containing the letters, memos, and transcripts for a young soldier named George Smith - a quiet young man with a terrible past and a shocking secret. As Outerbridge conducts George’s therapy, he gradually discovers the truth about George’s traumatic childhood, his twisted romance with an older woman named Anna, and the unusual obsession George keeps hidden from the world.

With the masterful touch that earned him the Hugo and Nebula awards, Theodore Sturgeon creates a character of both unsettling violence and irresistible humanity, eliciting both horror and sympathy.

“Sturgeon’s stories are treasures.” (Carl Sagan)
“The magic of Theodore Sturgeon’s writing lies in his understanding of the many ways there are to be human.” (Larry Niven)
“A master storyteller certain to fascinate.” (Kurt Vonnegut, Jr.)

Cosa pensano gli ascoltatori di Some of Your Blood

I read this long ago and thought it was excellent and still think so. Its a Silence of the Lambs kind of thing, though not a serial killer story. Very much a psychological investigation with some disturbing revelations. But do not think it will be a SF novel.

This was an amazing and fast read. There were several areas I replayed just because the terminology was unfamiliar. If you’re the sort of person who wants to know WHY someone or something is then this is a choice for you.

Not what you're expecting

Throw a different title or even cover art on it and you'd be fine. This is not a vampire book, or really even horror. It's more of a psychological deep-dive into the mind of a twisted, emotionally stunted hemophage. Not a bad listen/read, almost the written version of a found footage film, just don't hold your breath for a big supernatural reveal.

With the exception of the very beginning and the very end, this story is told through letters and telegrams. It is exceptionally well written, intelligently done, and gets creepier as it goes along. I would not say it is exceptionally scary, yet it is troubling. It is a mystery. You might find yourself having empathy for a killer. I promise you will not be bored.

Narrator does an excellent job.

I went looking for a literal vampire book and this came up. While the search engine was incorrect, the story was great.
I strongly suggest this to anyone who enjoys a bit of mystery and psychology.

Before "Science Of The Lambs" there was this.

This masterwork by Theodore Sturgeon is incredible. a hidden gem expertly written and narrated. the language and the format works well. The story creeps up on you slowly. It reads with a sense of voyeurism that allows us to get into the head of a disturbed individual as his psychiatrist discovers who this person really is. if you like horror and thrillers, I highly recommend "Some of Your Blood".

I listen to a lot of audiobooks, this story had me hooked from about 3 minutes in, wonderfully narrated, character development for a short story is on point. There are points near the end of this story that had me with mouth wide open...

Don't get what the great reviews are about

So I read some of the reviews prior to listening so I knew this wasn't going to be a supernatural vampire tale but this still felt like it was building to a reveal that really wasn't surprising. I don't really see how it's horror either? Just because there's blood?? Made it within 34 minutes of the end and lost interest, nothing exciting going on.

It’s So Good. It Will Pull You In

This book is not for children- or anyone else who doesn’t like gore. But if you like crime stories or psychological dramas try this. The narrator really makes the character, don’t think many could as thoughtfully. Very happy, free too⭐️

Well written & told, a believable and frightening vampire story. I would recommend it to fans of the genre.