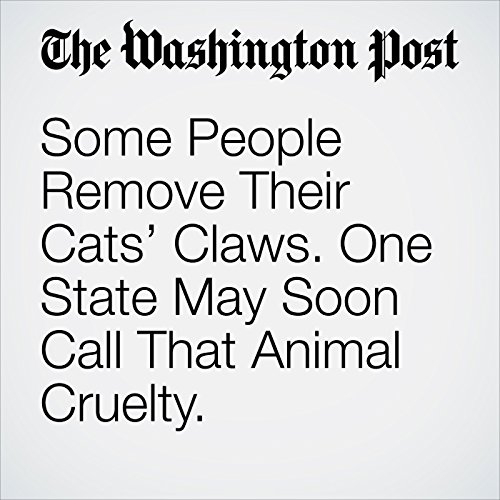 Some People Remove Their Cats’ Claws. One State May Soon Call That Animal Cruelty.

More than six decades after Misener’s letter was published, many cat owners continue to have the family feline declawed, chiefly driven by a desire to prevent kitty from scratching up the furniture. But the surgery is the subject of a growing divide in the veterinary community, with critics saying it amounts to a painful amputation that can lead to behavior problems in cats and others arguing that it prevents some owners from euthanizing scratch-happy cats. About 20 countries, mostly in Europe, have banned the procedure, as have San Francisco, Los Angeles and six other California cities. Some veterinary clinics refuse to perform the surgery.

"Some People Remove Their Cats’ Claws. One State May Soon Call That Animal Cruelty." is from the February 24, 2017 Animalia section of The Washington Post. It was written by Duncan Strauss and narrated by Jill Melancon.