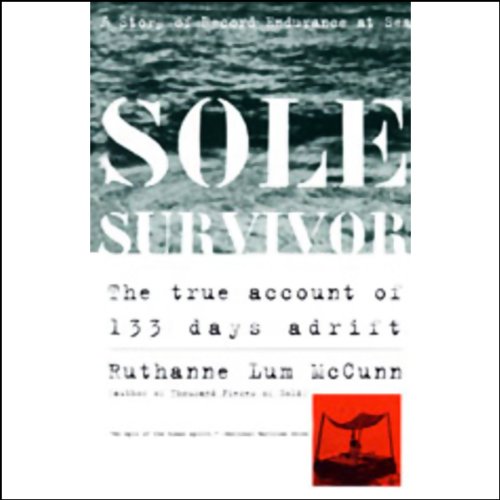 On November 23, 1942, German U-Boats torpedoed the British ship Benlomond, and it sank in the Atlantic in two minutes. The sole survivor was a second steward named Poon Lim, who, with no knowledge of the sea, managed to stay alive for 133 days on a small wooden raft.

Sole Survivor, based on three years of interviews with Poon, reconstructs his remarkable ordeal. We learn of a ship's crew that saw him but refused to pick him up; his ingenious ways of trapping water and catching fish (later used in U.S. Navy training films); his reaching land, only to find it an impenetrable jungle. When he was finally rescued at the mouth of the Amazon River, Poon was hailed as the "World's Champion Survivor." He still holds the Guinness world record for survival at sea. His story is an amazing tale of a young man's fortitude in the face of overwhelming odds.

"Poon's experience makes for a dignified, uplifting adventure tale." (Publishers Weekly)
"A vivid account of how one man used his intelligence and ingenuity to survive against incredible odds." (School Library Journal)

Thought this sound like a fun book to listen to, and was surprised by the details of survival. These details gave insight into the day-to-day struggle to live with some of the basic elements of life. This book created a sense of calmness, in that I too felt as if I was floating on a raft in the open seas. The suspense came almost in every chapter in not knowing hoe "poon lin" was going to keep surviving and figure out a way to live with the small scraps of materials he had.

The end of the book came to a close to fast. That is fast when it is compared to the day-to-day comparison of floating on a raft with little unchanging scenery.

This was a fun read, more than I expected.

I really wanted to read this book after some recommendations from readers who enjoyed books like Unbroken, Lost in Shangri-La, Long Walk and We Die Alone. It is no doubt a remarkable story of resilience against the harsh sea. A man surviving for 130+ days at sea on rain water, fish and occasional birds seems unbelievable but it is a true story that solely belongs to a remarkable human being - Poon Lim. Unfortunately, the book does little credit to this man’s incredible journey through lackluster writing and the vocal performance on the audiobook is less than stellar. Yet, it is still an engrossing listen and I recommend it because of its remarkable subject matter.

This is a great audio book. You feel as if you are on the raft with this poor soul. You feel his pain and joy. When you are through with this book you will feel like you lived the story also.

A real life version of

Throughly engaging book that I listened to quickly and with disbelief. The courage and resourcefulness show by Poon Lim in surviving alone with no training speaks volumes about the adaptability of man. If you enjoyed the fiction book Life Of Pi I would recommend this book as its non-fiction equal.

The fight for life

This is a good book and held my interest. I love the sea and know some of its dangers. I have to use all my imagination to really get into this story though, and felt empathy for this simple man who must have been terrified. That he survived this ordeal is miraculous and will not be repeated again in my lifetime.

The story is true, the adventure real, and the courage of the protagonist to survive for so long at sea is very uplifting. The narrator is very good, the mental images intense, and I felt like I was in the lifeboat with the hero. For sheer excitement and a constant feeling of an unkown foreboding or terror just below the surface or beyond the horizon, this book and this reading would be hard to beat. Highly recommended!

Amazing story, great narration. I'm not a native english speaker and i hade trouble understanding the modifications he did to the liferaft. Still recommend this book.

Uplifting account of hope, stamina, and clever adaptability. The reader is easy on the ears and the story original.

I have read (or listened to) at least a dozen survival books. Unfortunately this one was the worst.
Not once in the entire story does the author give you an idea of the progression of time. Surely the poor guy is keeping track some how.
Also, the fact that a person in the navy has no survival training is never addressed.
The best part of this book was knowing that when you got to the end you were sure he was going to make it.

What a grimly fascinating story!

Incredible tale of survival in the most challenging environment for humans. I soon got into the narrator's reading style. Well worth a listen.