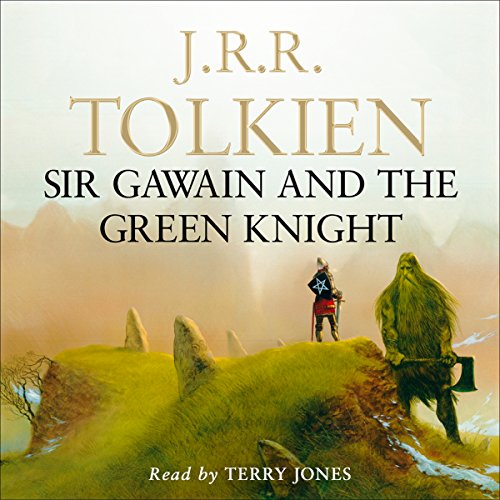 Sir Gawain and the Green Knight

"The introduction to Gawain is a little masterpiece." ( Times Higher Educational Supplement)
"This magnificent Arthurian tale of love, sex, honour, social tact, personal integrity and folk-magic is one of the greatest and most approachable narrative poems in the language. Tolkien's version makes it come triumphantly alive, a moving and consoling elegy." ( Birmingham Post)

I read Gawain in college in a different translation. I found revisiting the tale through Tolkien’s translation to be incredibly enjoyable. Pearl and Orfeo are two works that were previously unknown to me, and I am so glad they were included in this compilation. A real treasure! The alliterative verse is music to the ears. The performance of the reading of these three masterpieces is excellent!

I enjoyed SIR GAWAIN AND THE GREEN KNIGHT when I took my first English course at (what was then called) North Harris County Community College. It was in a huge peach-colored book that covered English literature through Shakespeare, I think.

At that time, we didn't cover PEARL or SIR ORFEO.

This translation and introduction by J.R.R. Tolkien brought all the pleasure back to me. I thoroughly enjoyed this. I can't wait to read it again, but I have too many books on my "TO-READ" list to do that quite yet.

The fact that this is an audiobook makes it even better. These poems are meant to be heard, not read.

Lovely tales from old English translated by lovely Tolkien. A classic tale, Gwain and the Green Knight But beautifully put into regular English without losing the feel of a poem. And a bonus two poems. Pearl is very religious heavy, but gorgeous. Still old English ways and thoughts but into modern tongue put. A bit harder to get through as the religious stuff (if you know your Faith well it seems tedious) the story loses and gets bogged down. But then is uplifted be the poem about the Minstrel King. Beautiful tale, that one. Tolkien is a genius, taking hard to read and write old English and putting it into our modern day English without losing the meter and verse of the poem. A true genius. A delight even if you don’t know Tolkien.

Excellent. Tolkien's genius is evident in this superb translation of three old English poems. In fact, it seems as though they provided some of the source material for The Lord of the Rings.

Great poems from our English past

These 3 poems are in Old English, updated by Tolkien. They are by contemporaries of Chaucer. If you listen carefully to the narratives and can put them into the social and religious context of the time, they will be revealed for the great works of literary art that they are.

If you could sum up Sir Gawain and the Green Knight in three words, what would they be?

Terry Jones did a brilliant reading and Tolkien 's translation of these poems are the best around.

What made the experience of listening to Sir Gawain and the Green Knight the most enjoyable?

It was great listening to something of such an ancient date. I may have never listened to this before, but then I saw J.R.R. Tolkien and thought I could give it a try. It's a good story.

What was one of the most memorable moments of Sir Gawain and the Green Knight?

The first appearance of the Green Knight.

What does Terry Jones bring to the story that you wouldn’t experience if you just read the book?

I did not. It's a great short story. I don't remember how old it is, but what a great way to get people interested in ancient stories by having a great and well known Author rewrite it.

I like epic poetry in the very rare cases it is good. All of these poems lack the deeper levels necessary to raise the poem to greatness. The best thing about the listen was the forwards by Tolkien and the translation that renders the poems understandable to modern readers. The poems are mildly interesting as a look into the story telling from centuries ago.

There was some humor and some emotion in the various poems, but when the book was over, there was little I cared about other than the forwards.

The narration was excellent particularly considering the difficulty of the work.

A lovely performance of these rare poems.

If you enjoy these poems, or are now learning about them, you are in for a treat. Terry Jones does a masterful and knowing job of narrating Tolkien's lucid translation.

The narrator did a good job of putting emotion into the verses. It was a little hard to follow, but I really enjoyed all three stories.

Terry Jones gives a brilliant reading and the introductions and poems themselves are very interesting. Although younger Tolkein fans may find some moments in this collection a little bit difficult to get into.
Being a picky type, I deducted one star for a bit of sloppy presentation here and there. The download has been taken from a CD package and two random rounge 'end of disc' moments have made it to the download. The joy of audio books is getting lost in a story and these few moments break that feeling. But pickyness aside this is a good quality, but not outstanding choice that I would recomend to old and young listeners alike.
If you enjoy a bit of Tolkien, the tales of King Arthur, Monty Python or a you like a bit of a theological edge to your listening, you will find a lot to enjoy here.

A classic story well translated but...

Gawain and the Green Knight is one of my favourite arthurian legends, and Tolkien has translated and presented it brilliantly. Pearl and Sir Orfeo perhaps inevitably take second place, but are stories well worth hearing.

It’s unfortunate that Terry Jones’ performance is somewhat lacking. I’m not sure if he has some sort of speech impediment but there is something about his pronunciation that really distracts from the prose - the lyrical alliteration of Gawain in particular is so important to the way the story is told and Jones just can’t hack it. I would recommend another reader, frankly.

This man cannot pronounce the letter R. It is a..

This man cannot pronounce the letter R. It is a pain and a waste of a good story

It is a great story translation. Interesting introductions to each piece. I would recommend this

The Connective Tissue of the long-missing link between the Bardic Oral Tradition of Arthurian Britain, and Middle-English(Earth)

The term "Middle Earth" is not intended, popularised but in no sense invented by Professor Tolkien - in his joint role as the foremost Medievalist and Linguist of the last Age, just recently passed (and past) - has oft been an obscure, obtuse, elusive designation to come to grips with, define in any concrete/materialist sense, notoriously difficult to firmly pin down.

It is as well that it is so. And it bespeaks further the restrained, cautious, meticulously precise character of the great fabulist, that this and countless other resonant tropes, terms and references to Myth/Ancient, Pre-Roman European History, the Biblical Patriarchs who preceded Noah's Flood and the Great Deluge are all presented, where they occur, unashamedly, nor even without any sense of the need for such false shame and otherwise afflicts the Proud, Proud Men, especially of the long-established scholastic Oligarchs, desperately scrambling to keep clung hold onto the final tatters of their Sacred rag-doll fetish of their domestic household gods of Expert Opinion, the pye-eyed Golem of institutional respectability and professional credibility which serves as the Champion of all who would exist day by day quartering within themselves the secret, private dread of suffering loss of face, any small humiliation that augers the possibility of embarrassment, even ridicule on the part of some, a few, perhaps even just a single one personal professional rival amongst his peers.

In the rarefied, homogenised, Yet cosmopolitan academy of Today, practically any Professor, even one of English Literature at one of the grandest and oldest seats of Higher Learning on the planet almostu certainly have some hesitation, mixed with apprehension, not to say a wave even of just outright fright, when proposing even a modestly Grand Unifying Theory of History of The Britons and the lands of the British Isles, and encompassing a span of centuries and events stretching from the landfall of Noah's Ark, to around 1350 and the Age of Chaucer and the origins of modern English and it's earliest narrative accomplishments in written literature.

And of those few might dare even attempt such a daunting challenge, it would be a bold Grown-wearer indeed who might feel confident enough to explicitly tie that history into the speculated fantasy Mythos he had constructed under, around and behind his bestselling fantasy novel and it's sequels and spin-offs originally written so as to be of greatest appeal to 8 year old boys, young adults and adult readers of a somewhat juvenille disposition of mind.....

But it is there, already in the background of England and of the British Peoples, and in the landscape, in the very lay of the land - and Truth is Truth, so what else is there to do, but bring it into the foreground, provide context and explain circumstance that brings these Truths and the realities together as Myth, Song, Fable and Satire, but to tell these stories, woven together as a single, coherent, epic narrative that constitutes the material fabric of a nation, it's People, their complete history up to the present time, and their connection to the lands and the landscapes of their birth.

Lo, I do see my Mother, and my Sisters and my Brothers.

Lo, I do see the line of my people, back to The Beginning.

Lo, They do welcome Me, and bid me take my place amongst Them,
In the Halls of Valhalla,

Where The Brave
May Live
For Ever.