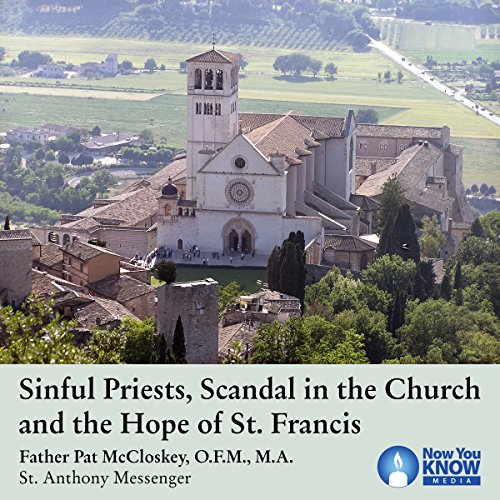 This is your definitive guide to the US clergy sex abuse scandal.

Through these extraordinarily well-researched and expertly delivered lectures, you will gain unique insight into the issues that have rocked the Catholic Church. But you will also discover a powerful source of hope and renewal - namely, Saint Francis and his powerfully effective response to scandal. Your exceptionally qualified guide is Fr. Pat McCloskey, OFM, author and editor of St. Anthony Messenger.

Acts of the Apostles and other New Testament writings tell us that the church's members sinned even before Jesus' death and resurrection.

In every century since the beginning of Christianity, the sins of the church's members have been a source of scandal and have undermined its proclamation of the good news of Jesus Christ. Jesus responded to Peter's denial by urging him, "Feed my lambs. Feed my sheep."

In this unique and informative series, you will see how Francis dealt with scandal in his own day and how his approach may help listeners deal with the Roman Catholic Church's biggest current scandal, the sexual abuse of minors by priests. Although emphasis in this series is on the United States, this has proven to be a major crisis in many other countries.

In the early 13th century, St. Francis of Assisi was well acquainted with sin among the church's members, clerical and lay. Francis' bedrock belief in the incarnation of Jesus, celebrated especially in the church's Eucharist but in the other six sacraments as well, led him to find a way to speak truth to power while remaining a committed member of the Catholic Church.

Comparing the early 13th and the early 21st centuries, the crises facing the Catholic Church are very different, but the spirit that Francis brought to the challenges in his day can aid us in dealing with the current crisis.

From this course, you will learn to use the love and guidance of St. Francis in your own response to these scandals as well as more fully appreciate how the strength of the rich Catholic tradition has helped carry us through such events to a place of hope and optimism for the future of the church.