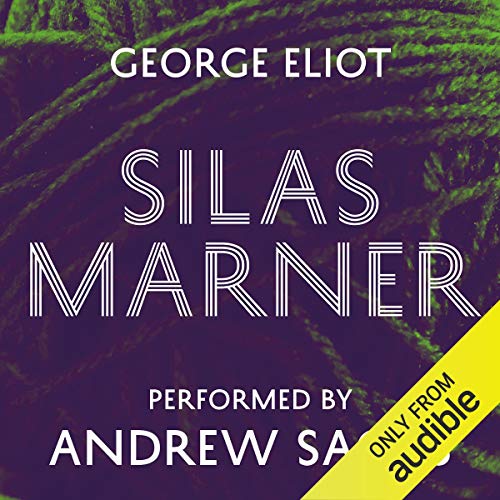 For 15 years the weaver Silas Marner has plied his loom near the village of Raveloe, alone and unjustly in exile, cut off from faith and human love, he cares only for his hoard of golden guineas. But two events occur that will change his life forever; his gold disappears and a golden-haired baby girl appears. But where did she come from and who really stole the gold? This moving tale sees Silas eventually redeemed and restored to life by the unlikely means of his love for the orphan child Eppie.

One of Eliot's most admired and loved works, Silas Marner is a tender and moving tale of betrayal, greed, loss, and redemption, with a finely drawn picture of early 19th-century England before the loss of the simple rural way of life. This moral tale shows the importance of valuing what really matters in life and that the hand we are dealt may ultimately lead to our happiness. Though it is Eliot's shortest book it still retains all the elements which are most recognisable and admirable about her work.

George Eliot was one of the leading writers of the Victorian era. Her novels, largely set in provincial England, are well known for their realism and psychological insight.

Beginning his career in repertory theatre, Andrew Sachs made his screen debut in 1959 in the film The Night We Dropped a Clanger. After numerous television appearances, he finally made his name in the 1970s with his role as Spanish waiter Manuel in Fawlty Towers, for which he was BAFTA nominated. A long career in acting and voiceover work followed, including narrating all five series of the BBC's BAFTA award winning series Troubleshooter (1990-1993), ITV's ...from Hell series (1997-2010) and the spoof documentary series That Peter Kay Thing (2000).

Andrew Sachs radio work includes playing Dr John Watson in four series of The Further Adventures of Sherlock Holmes (2002-2010) for BBC Radio 4 as well as appearing in their adaptation of Dirk Gently's Holistic Detective Agency in 2007. In 2009 he starred as Norris' brother, Ramsay Clegg, in Coronation Street. Andrew Sachs audiobook career is extensive and includes many children's titles, such as Judith Kerr's Mog series.

Would you listen to Silas Marner again? Why?

The story is simply beautiful. Andrew Sachs is perfect, not only in reading it, but in actual playing the different characters, with different voices and even accents.

What was one of the most memorable moments of Silas Marner?

With no doubt, the moment Silas finds the child in the very spot where he had last seen his stolen money.

What does Andrew Sachs bring to the story that you wouldn’t experience if you just read the book?

the subtle ironies in many of the villagers tones, which, English not being my mother tongue, I would not have guessed by reading it myself.

Not quite, but It made me think a lot about human relations. Or rather, about how relations make us human. Silas the weaver is a total stranger in Raveloe (despite having been there for a good fifteen years) until the moment he weaves himself into the community thanks to the child he has adopted, his daughter.

Wonderful Reading of a Memorable Classic

Silas Marner is a story that continues to resonate, and narrator Andrew Sachs does a wonderful job of bringing the voices to life. I listened to the entire book in one day. Couldn't turn it off.

The story itself was enjoyable. It follows the old formula of creating ambiance by adding in lots of seemingly extraneous dialogue (though not nearly as much as you'd find in some other old stories, like "Les Miserables"). If you know that in advance, and don't expect a perfectly streamlined, a-b-c plotline, you'll be able to relax and enjoy that ambiance. Raveloe will start to feel like a town you know. And you'll be glad you took the time, because it's a pleasant, feel-good story.

As for the narrator, he's even better than the story. I'd happily listen to him again.

I decided to read this book again after remembering the fond memories I had from reading it as a teenager. I am glad I did because I don't think I fully appreciated it then. I think I could safely recommend this book to anyone.

I thought the narration was wonderful. I think Andrew Sachs got all the characters spot on.

This isn't the sort of book I usually listen to, but I listened to Middlemarch this summer and really enjoyed it. I find Eliot to be a very interesting author. Her writing is not what I would call familiar or typical. She takes her time telling the story, taking you with her. This book was shorter than Middlemarch, but it had the same kind of leisurely pacing. With this book I didn't feel like I knew where we were headed, exactly. It wasn't predictable.

I will probably read more by Eliot, but I will wait until I have time to spare. This is not a good book to read in breaks in between work or while distracted with chores.

What did you love best about Silas Marner?

A great tale with a moral undertone.

I listened to the book whenever I travelled in my motor car. It transformed traffic jams into pleasurable events rather than frustrating ones.

So beautiful. A pure pleasure.

An excellent version of a classic

While I enjoy great Victorian literature, I can't say this book is on the level of Jane Austen, Elizabeth Gaskell or Charles Dickens. It is definitely worth a listen however, if for no other reason than that it is a classic and well done. I do not think I would have enjoyed reading it as much as in the city. Andrew Sachs could not have been a better narrator. I got this on a deal of the day and for that reason it was well worth the money. If you're at all interested I still think it will be worth it to you.

I smile when chance on a classic - and enjoy it so much. This story escaped my high school days and it's in much later to have found it.

Just enjoyable!! A good pick for the narrator and the story of the redemption of a wronged man turned miserly loner is just beautiful..

In this bleak political year (2016), where humanity seems to be running in reverse and a profound sense of worry has taken root around the world, a book that reinforces the triumphant power of love and family to conquer greed, loneliness and self-interest is most welcome. I first read Silas Marner as part of my Secondary School English course over 30 years ago and retained fond memories of it’s fairytale-like charms. My recent reimmersion in this petite classic with Audible was therefore immensely nostalgic, with Andrew Sachs delivering an absolutely flawless and captivating performance. A marvellously accessible introduction to the writings of George Eliot. Highly recommended!!

Would you listen to Silas Marner again? Why?

The language and characterisation is so wonderful.

What was one of the most memorable moments of Silas Marner?

The confrontation between Silas and Godfrey Cass.

Have you listened to any of Andrew Sachs’s other performances? How does this one compare?

No. It was very fine I will look out for more.

Everyone should read this joyful book.

Every George Eliot book is a joy and a revelation, and Silas Marner is no exception. It seems like a deliberate reversal of classic motifs - the Prodigal Son, the Lost Princess, the Wicked Hunchback. She deals with her recurring themes of gender and disability / difference with astounding subtlety and complexity. Her radical ideas about the role of religion in society and the upbringing of children are straightforwardly described, yet natural and believable in how they affect the lives of her characters.
Sachs does a good job in the narration, although some of the more peripheral characters can become caricatured, which can belie the integrity of every actor in Eliot's human dramas.
And her description is simply sublime! I particularly like this vignette from Chapter 16:
"The sharp bark was the sign of an excited welcome that was awaiting them from a knowing brown terrier; who, after dancing at their legs in a hysterical manner, rushed with a worrying noise at a tortoiseshell kitten under the loom, and then rushed back with a sharp bark again, as much as to say, 'I have done my duty by this feeble creature you perceive'; while the lady mother of the kitten sat sunning her white bosom in the window, and looked around with a sleepy air of expecting caresses, though she was not going to take any trouble for them."
The observations and loving humour that underlie such passages are, to my mind, part of what makes Eliot a writer for all time.

A wondeful story that has been well narrated

Silas Marner is a very moving tale that can be interpretted on many levels. It is just as relevent today as it was when written. Sometimes I have found that reading George Elliot was hard going as the language she uses can be very prosaic, but the joy of having it well narrated means that you can just enjoy the unfolding of this simple and happy tale.

I have always loved this story and this recording did not disappoint. Great to listen to.

a much loved tender story. it is not long before you get used to the turn of speech and just enjoy this classic.

Our latest book club book - and a beautiful listen- anyone who tells you that George Elliot goes off on tiresome verbal wanderings is missing the point; and anyway why shouldn't she if what she comes out with is such a wonderful insight into past times and such an evocative read. And there's some that say may be so and there's them that says not but let no man tell me i don't care for myself. Love it! And a happy ending too. Rarely have I felt such a feeling as when Silas comes out of the dark and despair for the love of humankind - it is very uplifting.

Gentle charming story, in the relaxed tones of Andrew Sachs, whose vocal characterisations beautifully complemented the book. This is a book to 'treat' yourself with. This was my first foray into George Eliot territory, and it certainly won't be my last!

Andrew Sachs does it for me!

I loved this book. Andrew Sachs is a wonderful reader, and I wish he read more of the 'classics'. George Elliot's descriptive writing is lovely, and always conjurs up the feeling of the time, which modern writers of 19th century fiction cannot do nearly as well. A good first introduction to George Elliot's writing, as it is short compared to most of her novels.

I would recommend Andrew Sachs to do a relaxation CD, as his voice could send me to sleep if I wasn't interested in the subject matter!

Andrew Sachs is an excellent narrator, the true test of this skill is to become invisible so the story takes over. Very moving.