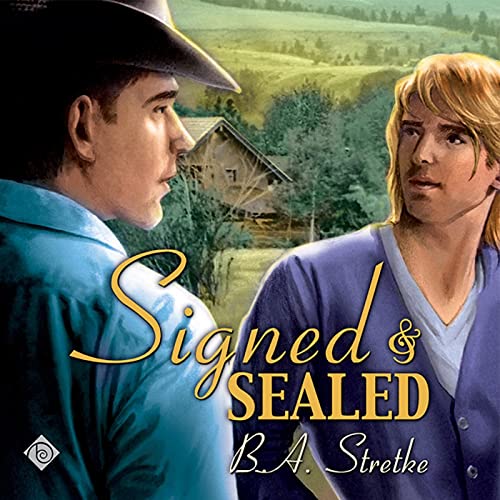 William Drake’s living an ordinary life - he has a job, a dog, and a house near Lake Superior - when a frantic call for help from his ne'er-do-well sister, Katrina, throws a big rancher-shaped kink in the works. Proving that no good deed goes unpunished, Will’s arrival at the Montana ranch belonging to Katrina's fiancé, Martin, is marked by a flat tire and unexpected help from a tall, dark, and handsome Good Samaritan. The stranger turns out to be Elijah Hunter, Martin's brother - the most unsettling man Will has ever met. Eli’s fury over Katrina’s misdeeds boils over onto Will, and he demands that Will remain on the ranch until the matter is resolved.

While Will can take Katrina's place, Eli doesn’t make it easy. He tests Will at every turn, but Will’s uncompromising morals exceed even Eli’s exacting standards. The attraction growing between them is further complicated by Eli’s ultimatum: he's still holding Katrina to the pre-nup she signed ... unless Will agrees to marry Eli instead.

Entertaining but completely unbelievable plot! Not sure what planet this story-line would be plausible on but it sure ain't this one!

Narrator is wonderful but the storyline is not believable. If you want fictional you'll find it here.

Would you try another book from B. A. Stretke and/or Jeff Gelder?

Would you be willing to try another book from B. A. Stretke? Why or why not?

Maybe, this was an OK read, you just had to suspend any expectation of a realistic story line. Also there were some pretty big plot holes. But it wasn't "painful" to listen to like some other books.

Did Jeff Gelder do a good job differentiating all the characters? How?

He did OK, he is getting better. His narration is still a little "wooden" But again, it wasn't a bad listen.

Could you see Signed and Sealed being made into a movie or a TV series? Who should the stars be?

This is a Harlequinn Romance novel. The MCs could be a pirate and a damsel he "kidnapped" b/c her father owed him a debt. It is actually pretty funny (unintentionally). That said, it is still a nice romance. But be warned, I though Eli was an a**hole and my opinion didn't change even with the HEA.

Pie in the sky story ruined by a Narrator

The story, while far fetched was still engaging. I was ok with suspending disbelief about the contrived situation that brought the characters together, but the terrible narration, where several times it goes monotone for a noticeable length of time and a complete lack of any kind of character definition in tone or cadence, had me considering skipping chapters to get to the end.

This story was never going to be a more than a light fantastical escape, unfortunately it wasn't an escape but an imprisonment at the hands of bad narration.

Where does Signed and Sealed rank among all the audiobooks you???ve listened to so far?

This book will go into my easy listening rotation. It is a good listen that is easy to follow and draws the listener in.

If you???ve listened to books by B. A. Stretke before, how does this one compare?

This is the first book by this author I have listened to, but I look forward to more.

I adore B.A. Stretke and was looking for maybe the crimson corp or something like that to listen to.. this was all that was available so I figured I’d try it out…
I’m NOT a fan… the story was like a giant run on paragraph that just keeps repeating …
This whole story could have been covered in one chapter..
also the weird music between chapters is really annoying. Honestly the whole thing is like a harlequin style pamphlet with sex… so disappointed..

Liked the book but not the narration

I read this book way back when and it was an enjoyable read to just sort of escape and suspend belief a bit. Cute and fun. So I figured I would try the audio.
I couldn't make it halfway. Monotone, no character inflection and the way the narrator pronounced "asked" and "ask" was supremely irritating.

The narrator was the best part of this book

I couldn't finish this book. This story is very reminiscent of many m/f romance books. The character of Will could have been any damsel is distress in all his mannerisms. Not femme, just weak. I like femme when well written, but not weak - male or female. The narrator was outstanding with what he had to work with.

Plot Based on Foolishness

I've been working on accepting that average people are actually not that smart so I made myself stick with the book until the end, but it was a challenge because the conflict is based on the improbable delusional 'thinking' of the main character.

Something I found intereting is that it's a classic gothic romance plotline with melodramatic threats and misunderstandings and miscomunications between the protagonist and antagonist, though the threats would not work on someone who wasn't very foolish or crippled by low self esteem.

I believe Gelder (the narrator) did the best he could with retarded dialog, though he did mispronounce Helena, which seems weird, but he probably had to struggle to keep from dozing.

I wondered if the author was writing a parody of 50-60s gothics.

Oh well it's over.

I've listened to it countless times and I don't think I will ever get to be tired of it. I often listen to it to fall asleep the narration is good it's a little wonky in places but other than that I love it.

A delightful HEA with strong characters. one is kept wondering what next and eager to fnd out. perfectly narated.