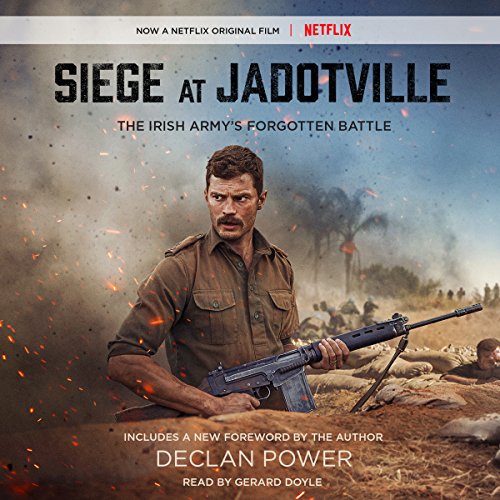 The Irish soldier has never been a stranger to fighting the enemy with the odds stacked against him. The notion of charging into adversity has been a cherished part of Ireland's military history. In September 1961, another chapter should have been written into the annals, but it is a tale that lay shrouded in dust for years. The men of A Company, 35th Irish Infantry Battalion, arrived in the Congo as a United Nations contingent to help keep the peace. For many it would be their first trip outside their native shores. Some of the troops were teenage boys, their army-issue hobnailed boots still unbroken. They had never heard a shot fired in anger. Others were experienced professional soldiers but were still not prepared for the action that was to take place.

Led by Commandant Pat Quinlan, A Company found themselves tasked with protecting the European population at Jadotville, a small mining town in the southern Congolese province of Katanga. It fell to A Company to protect those who would later turn against them. On September 13th, 1961, the bright morning air of Jadotville was shattered by the sound of automatic gunfire. The men of A Company found their morning mass parade interrupted, and within minutes they went from holding rosaries to rifles as they entered the world of combat. This was to be no Srebrenica; though cut off and surrounded, the men of Jadotville held their ground and fought. This is their story.

Fitting tribute to those who fought.

Exhaustive and compelling - a thorough study of the events leading to and during the battle at Jadotville in The Congo in September 1961 with clear, polished, and well-paced reading.

Said that the Russians put a man on the moon a month before the Irish troops deployed to Africa in May 1961. And claimed Yuri Gagarin was said man. While Gagarin was the first man in space, he was not, nor was any Soviet ever to land on the moon, and the Americans would only finally land a man on the moon in July of 1969. If an author of history can't get two of the most well known and important events of the 20th Century right, why should the rest of their claims of history be trusted?

Great Book! Really enjoyed it. Great insight into a small bit of history that was covered up.

news to me, shocking as an Irish man.

it should be thought as Irish history. very good listen. enjoyed the film too. 5 thumbs up.

History rewritten and a cover up revealed!

Having recently viewed the Netflix release of this story I was propelled to discover more of this story. Being Irish I was curious as to the reasons behind the cover up of information regarding this event in history. This story is well written, not too complex or confusing in language. It is also clearly narrated. This audiobook is truly worth giving your time to listen and reflect upon its contents.

This is an interesting piece of history that’s worth examining. Sadly, Powers is just not that good a writer, with an uneven timeline possibly with an aim at drama, that only ends up being confusing. There are also many redundancies and repetitions, and his own political views are hardly hidden. However, his analysis of the facts of this sadly overlooked chapter of history mostly makes up for this, and I do recommend it.

A thorough analysis of the issues concerning this action involving the Irish armies involvement in the UN’s Congo mission in 1961. The phrase ‘lions led by donkeys’ comes to mind.