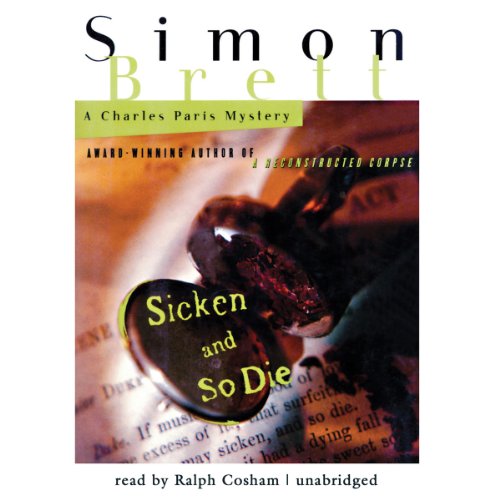 Simon Brett's oldest and most beloved character, Charles Paris, is back. Paris, the often out-of-work actor, has a good part for a change, playing Sir Toby Belch in a summer festival production of "Twelfth Night." But when the director takes ill and then Paris' friend in the production is the apparent victim of intentional food poisoning meant for Paris, it's not long until the bodies start to turn up. Paris is forced to deal with a wild young director whose idea of Shakespeare the bard himself would hate.
©1996 by Simon Brett (P)1997 by Blackstone Audiobooks

"In Charles Paris, the third-rate actor but first-rate sleuth, Simon Brett has devised one of the most ingratiating heros around." (The San Diego Union-Tribune)

The Food of Love

Charles Paris is a working character actor. In Britain, that means he is a classically trained professional who takes on roles large and small, in venues from stage Shakespeare to sitcoms, from West End blockbusters to radio talk shows, from summer festival theatre to TV commercials--in short, whatever's out there. It's what he does and what he is, however difficult the life. Charles also has a drinking problem, a failed marriage, and a habit of finding himself in the midst of mysterious deaths. "Sicken and So Die" comes late in the Paris series (it's entry 16, I think). Having read almost all of them, this one's my favorite.

The story revolves around a summer festival production of Shakespeare's "Twelfth Night," in which the aging Charles is thrilled to be cast as Sir Toby Belch. The director is a friend who Charles trusts to approach the Bard with due reverence and a traditional interpretation. But his friend falls mysteriously ill (is poison a possibility?) and is replaced by a "hot" young director from Romania, whose approach is to trash tradition. Amazingly, one by one the cast members (all except Charles) embrace what emerges as an electrifying and dynamic take on a old classic--the type of modern reinterpretation that only emphasizes Shakespeare's genius.

The rehearsal road is rough and paved with accidents (or are they?) and eventually deaths. But it is the world and people of the theatre, not that of the detective, that pulls the reader in. I suggest scanning a synopsis of the characters and plot of "Twelfth Night" (the book's title comes from the play's famous opening speech that begins "If music be the food of love, play on..."). But you don't have to like Shakespeare to thoroughly enjoy "Sicken and So Die."

Author Simon Brett is a long-time writer for British radio and television, and the short, engrossing Charles Paris mysteries reflect his familiarity with the actors' world, whose finest moments and great foibles Brett views with keen perception and wry British wit. The subsetting of "summer festival theatre" is also portrayed with brilliant cynicism and fun. (I was not surprised to read in his biography that Brett's wife Lucy works with the Chichester Festival Theater--this is definitely a book written from first-hand experience.)

I may be biased toward Charles Paris; I confess I spent several summers in my twenties working backstage (with one or two minor and eminently forgettable appearances onstage) in repertory theatre. With the realization that my stage name could only be Noel Talent, I moved on to other career options, but I gained a healthy respect for the decidedly unglamorous world of the performing artist. Brett presents that world with humor and affection, and I highly recommend his Charles Paris series (I understand there's a new one coming out soon, after a long hiatus). They don't have to be read in order, and "Sicken and So Die" is definitely among the best of them.

This book as like the others from this author is always a great pleasure to read. The characters keep you guessing and the ending is always not what you think. Great series of mysteries..keep them coming