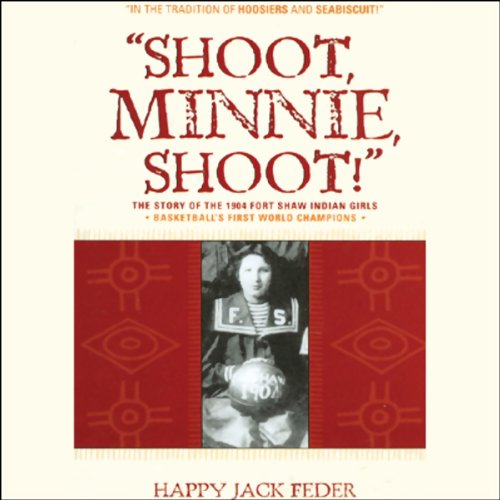 In 1903, over 300 Indian children from across America lived at the Fort Shaw Indian Boarding School in a remote, isolated valley in Montana. Among the children were a handful of teenage girls, many who had only lived in tepees. They quickly learned to play basketball and resoundingly crushed all opponents, including men's and women's university teams. After the games, the girls recited Shelley and Longfellow, played mandolins and violins, sang, danced, and pantomimed.

In less than one year after first seeing a basketball, they were crowned the first world champions of basketball at St. Louis' 1904 World's Fair. Millions saw them and gained a deeper understanding and love for Indians. This is the story of that team, seen through the eyes of star player, Minnie Burton.

"Anna Fields brings this fictional biography to life with respect and joy. Fields skillfully portrays the various Native American children from a wide variety of tribes....One needn't be a basketball fan to enjoy this reading." (AudioFile)

I gave the book 2 stars because the story of the Fort Shaw Indian girls basketball team is fascinating, but this particular telling of it is so full of inaccuracies that I hardly know where to begin. The Shoshone are not part of the Sioux (Lakota!) nation. F.C. Campbell was only 6 yrs old when the Massacre on the Marias took place. The girl holding the ball on the cover is Belle Johnson, not Minnie. I couldn't help but roll my eyes at the cultural misrepresentations that were found throughout the book. I imagine that Shoshone, Blackfeet, and other Indian readers will be more than irritated by the distortions of their cultural and religious beliefs.

A peek into Montana History

I'm from Montana and took Montana history in school. This story may have been told in class but I don't remember hearing it before so it was fascinating to find out about the success of these amazing female athletes in a time when there was much discrimination against the native people of our country. The story was fictionalized by the author who took a very positive uplifting point of view about the adventures of the Fort Shaw Indian girls basketball team. The narrator, Anna Fields, did a nice job of giving each character in the story a unique voice. I was slightly disappointed at the end to find out that parts of the story were just fiction and never actually happened but at the same time, I think Happy Jack did a good job of imagining what might have gone on in the journey of the girls.

Would you consider the audio edition of Shoot, Minnie, Shoot! to be better than the print version?

it was based on fact.

What does Anna Fields bring to the story that you wouldn’t experience if you just read the book?

I loved the book it made me feel good

I have recommended it often