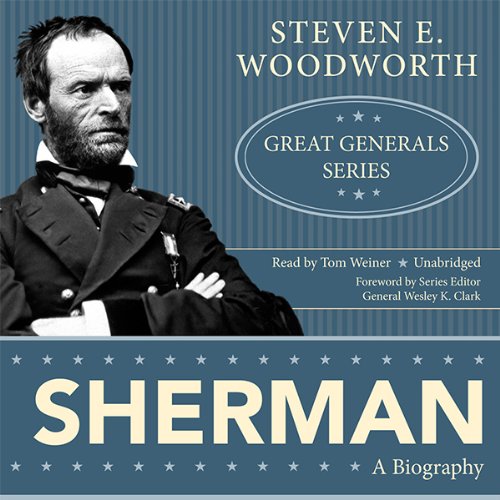 William Tecumseh Sherman (February 8, 1820 - February 14, 1891) was an American soldier, businessman, educator, and author. He served as a general in the Union Army during the American Civil War, for which he received recognition for his outstanding command of military strategy and criticism for the harshness of the "scorched earth" policies that he implemented in conducting total war against the Confederate states. Military historian Basil Liddell Hart famously declared that Sherman was "the first modern general."
©2009 Keith Alan Deutsch (P)2009 Blackstone Audio, Inc.

This Review Needs a Title...So, I

This book is supposed to be part of a series on "leadership" via generals, but what was there must be inferred...except for Sherman's use of maneuver warfare. That, was aptly demonstrated. In this audible book, Wesley Clark babbles through an introduction to little effect. I'll admit that this book was a good intro to his life and is fine work for those who want a quick and accessible entree, but it fell short of a leadership lessons. Instead of the usual writing about generals, i.e. details about their battles, I'd much rather read about the man, his motivations, background & integrity, which this book didn't really do. After reading about Sherman in other books, I conclude that his legacy was more than the pitiful conclusion stated in this one. For example, he also contributed to and influenced the US Army Air Corps and Naval strategy, to include 8th Air Force as well as MacArthur's and Nimitz' conduct of WWII. This was not even mentioned. Where are the lessons?