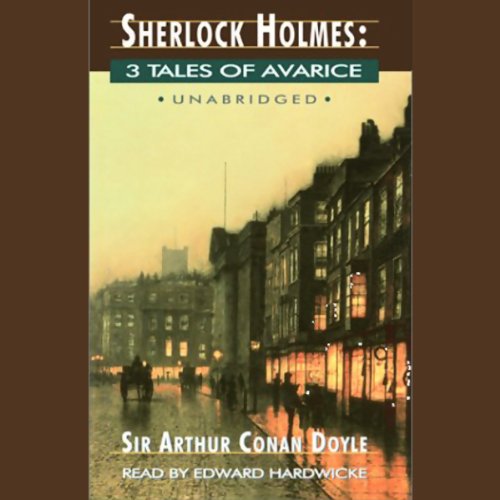 The legendary Sherlock Holmes is on the trail of some particularly slippery thieves in this collection of 3 classic tales. Motivated by greed and jealousy, the criminal in "The Adventure of the Priory School" aims to kidnap a young lord - but causes a far greater tragedy. In "The Red-Headed League," Holmes catches one of London's most daring criminals while investigating the strange business of the Red-Headed League, a suspicious organization that gives its members money for "nominal work." An unusual sequence of events in "The Adventure of the Blue Carbuncle" leads Holmes to locate the precious jewel owned by the Countess of Morcar. The stories are read by a true master, Edward Hardwicke, a talented actor who plays Sherlock Holmes's associate, Dr. Watson, as seen on the popular PBS series Mystery!

Edward Hardwicke, who played the second Dr. John Watson in the long-running Granada TV series, reads three of Arthur Conan Doyle's original stories, each with the theme of avarice. Hardwicke does an excellent job bringing these classic stories to life.

You can never go wrong with Sherlock Holmes who's tales are timeless, I love the feel. The narrator was professional. Love reading it.

The combination of Conan Doyle and Edward Hardwick is a Remarkable gift for me. They take me to a whole other world, great stuff!

Love the high quality narration and voice acting of the the narrator, The Adventure of the Blue Carbuncle is always a favorite.

It was very easy to listen too bur not very exciting. Not for me. Thanks.

The Narrator is familiar to me from the TV series.
Slightly expressionless at times.
Ok