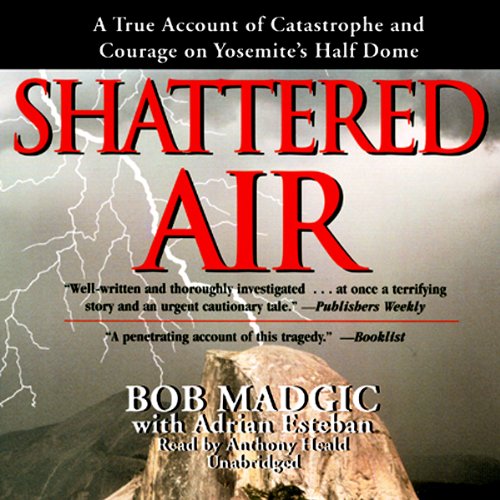 On the evening of July 27, 1985, five hikers made a fateful choice to climb Yosemite's fabled Half Dome, even as the sky darkened and thunder rolled. By night's end, two would be dead from a lightning strike, three gravely wounded, and desperate EMTs would be overseeing a harrowing midnight helicopter rescue.

Shattered Air is a haunting account of recklessness, tragedy, courage, and rescue, a book whose depiction of nature's power is tempered by unforgettable portraits of human courage and the will to survive.

©2005 Robert Madgic (P)2007 Blackstone Audio Inc.
"[A] penetrating account of this tragedy." ( Booklist)
"If you've ever felt cavalier about dealing with mountain thunderstorms, this drama about lightning and death should fix it." ( San Francisco Chronicle)
"[A] well-written and thoroughly investigated account....Madgic's contribution to the adventure category is at once a terrifying story and an urgent cautionary tale." ( Publishers Weekly)

Had me on the edge of my seat

This book is the best read I've had in a while. I like adventure stories and nature and this combines both. Yosemite, lightening, hiking, rescue are all involved and makes for a good listen.

Not that much Catastrophe or Courage

I love stories about mountains, extreme weather, outdoor adventures and heroic survival and rescues, but this one just isn't that interesting. Summary could be - a bunch of stoners ignore all warnings, go up Half Dome in a storm, the most inexperienced die and a bunch of bypassers are forced to put themselves in danger to rescue them. The characters aren't particularly likeable or interesting and there's nothing particularly exciting about the rescue. Lots of detail and history about lightening strikes, but for the first time ever I had to make myself listen to the end, hoping it might become more engaging - but it never did.

What are you guys thinking.

This book shouldn't exist! It's semi well written and kinda of interesting but like a 5th grade essay he losses his point so entirely that by the time he wanders back you forgot what the story is supposed to be about. There's a whole section on mountain climbing ( which has no relivence to this story or it's persons. There is also this forbidding unmentioned FEAR of storms that I feel he really got heavy handed with. The author really feels like humans should be inside from a half hour before a storm to a half hour after it..... Who has time for that in life? This book could have been half it's length with 2x the excitement if he had left his fluff out of this book.

Good to the last word

This book is one of the five best books I ever listened. The story is attractive and the narrator's performance is great. I wish I can give it six stars.

I thoroughly enjoyed the storyline of this book. Unfortunately, the story was overshadowed by an overwhelming amount of unnecessary detail that did not add anything to the understanding or enjoyability of the plot (ex. detailing the accounts of climbers that were never involved in the accident and never mentioned again after the initial introduction). I consistently found myself saying "Just get on with it already!" Good enough to read once but too aggrivating to read a second time.

This should have been a Reader’s Digest condensed story. It’s about guys who do drugs, make bad choices, and need to be rescued. They’re not very interesting or likeable. I’m somewhat compulsive about finishing books, so I did, but it wasn’t worth reading.

Way too long of a book for a good story.

This is a great subject for a book. A great rescue and a great story about 1985. It was way too long and way too much extra stuff. We thought through it but I almost shut it off and didn’t finish it. But I listen to this book again...probably not.

One of the best nonfiction books I’ve ever read! Exciting, informative and well researched! You won’t want to put it down!

Didn’t expect it to be so riveting!

Really harrowing true story read by an excellent narrator... I had never even heard of this tragic incident and didn’t really expect to be so interested. It was a great book and I learned a lot about natural phenomena and Yosemite.