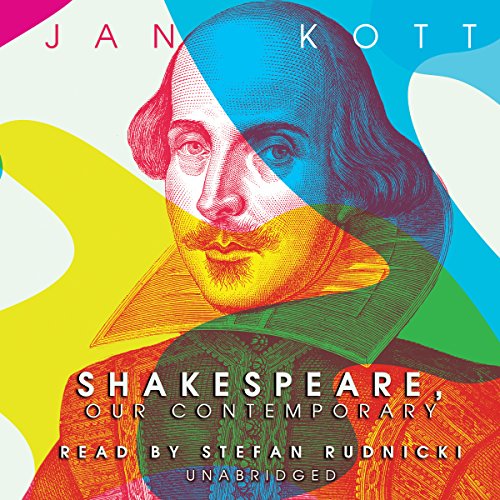 Shakespeare, Our Contemporary is a provocative, original study of the major plays of Shakespeare. More than that, it is one of the few critical works to have strongly influenced theatrical productions.

Peter Brook and Charles Marowitz are among the many directors who have acknowledged their debt to Jan Kott, finding in his analogies between Shakespearean situations and those in modern life and drama the seeds of vital new stage conceptions. Shakespeare, Our Contemporary has been translated into 19 languages since it appeared in 1961, and readers all over the world have similarly found their responses to Shakespeare broadened and enriched.

I'm not sure when this was written, but I was completely affronted by the author's misogyny, utilizing words such as "sluts" and "tarts" to describe women; it has no place in serious Shakespearean criticism. The reader gets the impression that the author would like to be seen as a cool, man about town who happens to also be an academic - unfortunately he comes off as a sad, wannabe who probably got ignored by women for most of his life.

I like this sort of thing now and then and especially in regards to Shakespeare when you can get a new slant that takes you back to wanting to reread/listen/watch the plays again. Truly bottomless works. Kott has some very good insight and ideas. This may not be for everyone, but if you're even looking at it then it will probably be of interest to you. I recently listened to all of the plays and poems again and so had much of them in my head and enjoyed this. I will return to it again and even got the paperback after listening.