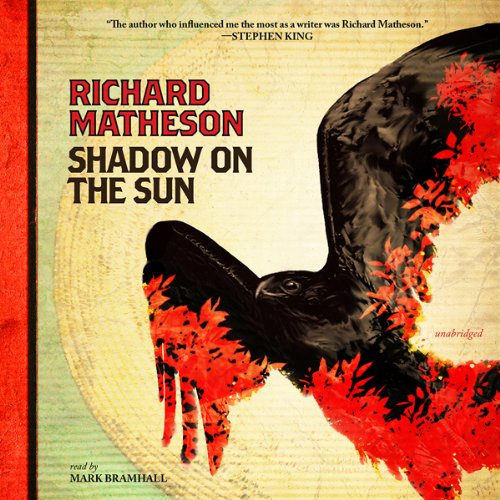 Shadow on the Sun

Southwest Arizona, a century ago: an uneasy truce exists between the remote frontier community of Picture City and the neighboring Apaches. That delicate peace is shredded when the bodies of two white men are found hideously mutilated. The angry townspeople are certain the “savages” have broken the treaty, but Billjohn Finley, the local Indian agent, fears that darker, more unholy forces may be at work. There’s a tall, dark stranger in town, who rode in wearing the dead men’s clothes. A stranger who may not be entirely human.

Originally published as a mass-market Western in 1994, Shadow on the Sun has been largely overlooked by horror fans and general readers. But this tale of supernatural terror is sure to chill the blood of Matheson’s many fans.

“Perhaps no other author living is as responsible for chilling a generation with tantalizing nightmare visions.” ( New York Times)

If you're a Richard Matheson fan, this book is well worth your time. It's an excellent blend of two of his favorite genres.

The reader does a terrific job presenting the book.

I enjoyjed this book. It is not remarkable in any way, but story is interesting enough and it keeps you on the edge until the end. Characters are likeable, although you don't get to know them really all that well. Thr performance is fine too.

Old West with a Mystical Twist

What did you love best about Shadow on the Sun?

The scenes that foreshadowed the ending - the Corcoran brothers observing the treaty talks and what happened to Little Owl.

Who was the most memorable character of Shadow on the Sun and why?

Billjohn Finley. He was formally educated yet had an understanding and appreciation for the native American culture and ways. He respected - and ultimately rightfully so - the Native American views on mysticism.

I am getting pickier and pickier about books any more. If I returned every book I lost interest in and couldn’t finish, I’d have a few hundred credits. It is rare that I find a book that is hard to put down (or pause). I listened to Hill House and this one by Matheson. BOTH were hard to pause for seemingly insignificant tasks like going into work to support my family. I can’t wait to listen to I am Legend. The narrator did an incredible job with the voices and accents. He’s a pro. I did a search for him on audible and was not at all surprised when I got 13 pages of results. Excellent book all the way around!

Short on length but very good.

Excellent audio performance, marvelous writing and story, a true poet of terror. I didn't know this author existed, listened because it was free, great decision.

Loved it, amazing story that is like most Native American lore, truly unique and beautiful has fantasy, real life, feeling, and superior illustrations

This book completely took me by surprise. The characters Finley and Buttrel were perfectly created and imaginative. Wish I could give it 10 stars!
I purchased a paper back copy so my uncle can enjoy it too.

Very well written story. Perfect pick for voice narration. The story was a pleasant surprise from what I had expected reading the overview.

Richard Matheson is near the top of the scale when it comes to horror writers.
Few can compete as his level of quality.

...AND, Richard Matheson has written some of the scariest Native American horror stories I’ve had the enjoyment to shudder to.
The Manitou books being a really good place to find some of his best & creepiest.
Richard Matheson discovered that Native American mythology has a lot of really frightening creatures in it - frightening on the level of H.P. Lovecraft’s cosmic horrors.

Injecting Ancient Native American unearthly weirdness into modern American culture works extremely well in his other books. So, it seems like a natural idea for Matheson to write a period piece dealing with a Native American supernatural threat in the old west.

His research into the details of the times and the culture all felt very real.

His monsters are all strangely unique, and not a retread of anything you’ve read about over, and over.
In “Shadow on the Sun” Richard Matheson once again delivers the freaky frights.

I recommend this book.
I’m Old Man Parker, nag-nab-it, …and this is a good’un!

The story is melodramatic, the characters are superficial and predictable. Weak storyline with many unbelievable and pointless elements.