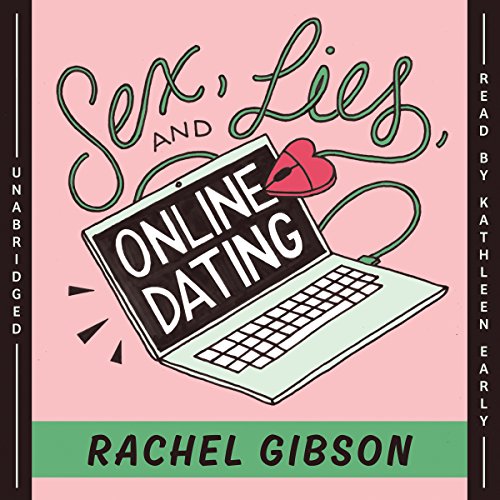 What is it about men anyway? Bad cars, bad jobs, even bad teeth - nothing convinces them that they can't snare a size-two babe with a D-cup chest. And after way too many Internet dates with men named "luvstick" and "bigdaddy182", Lucy Rothschild should know.

But sitting across from her now is "hardluvnman", and he seems different - sensitive, honest, and hot! He says he's a plumber while Lucy claims she's a nurse. She's really a mystery writer, dating online while researching her next book. Hey, everyone lies a little, don't they?

But Quinn is really an undercover cop hunting down a serial killer, and he sees Lucy as his top suspect. While he could really go for this smart, sexy woman with the killer bod - if that's the only thing "killer" about her - he knows he needs to wine and dine her and discover the truth. Hey, he realizes the dating scene can be deadly - but this is ridiculous!

Would you listen to Sex, Lies, and Online Dating again? Why?
Oh yes, as this is a feel good, make smile/ laugh out loud story. Author can't make every story a great one, but this right up there. Yes, our heroine has her heart out there (author could have done better editing in that department and added to mystery instead, but this is a Romance after all.
Remember these are simple romances that are written to make you smile or laugh, so if you are not in the mood, come back to it if you feel too lousy and can't give it listening justice.

What other book might you compare Sex, Lies, and Online Dating to and why?
If you like this story, check out Julie James U.S. series/ reader Karen White. All time best.
Also, Tiffany Snow series/ reader Angela Dawe. Both the male version are great too.
Janet Evanovich series with Nicolas Fox, best reader Scott Brick.

Have you listened to any of Kathleen Early’s other performances before? How does this one compare?
Ms Early is at the top of her game in this one. She has improved her male voice with the perfect cadence that makes our hero, Quinn, YUM. I mean Yum. She has a wonderful cadence that interprets an author's work when in her female role. That's why this story is not to be missed. Ms Early earlier work on Simply Irresistible/ Georgina Howard story with Hockey player was very good (don't miss it), but she had not quite gotten her male voice groove as in this one.
Ms Early's work on author Karin Slaughter's Will Trent series is great, but that author writes horror mysteries so you have to have a strong stomach to buy them. I can only think that her work on that series has made her male voices so much better and put her in the audio limelight.
Note: I use the new 1.25x speed to get the author's intent.


Any additional comments?
Try to buy this author when on 50% sale or gold credit as they are light stories that entertain.

If you could sum up Sex, Lies, and Online Dating in three words, what would they be?

What other book might you compare Sex, Lies, and Online Dating to and why?

It must be love. Another cop simiar to Quint. A hilarious love story! Probably my favorite of all.

What does Kathleen Early bring to the story that you wouldn’t experience if you just read the book?

No. I wanted to parse it out and savor it.

I have read all of Rachel's books and liked all, some more than others. I live in Eagle ID near Boise so esp find those set in Idaho fun though the other books have been very entertaining as well.

I believe this is my first time reading/listening to anything by Rachel Gibson but I will look for more of her work for sure! There was so much I could relate to in this book. With the dates at Starbucks all the way to falling in love too fast. Wonderful book. Not for children but still a great listen/read!

Very amusing story. Had to listen to it in one setting. Finding out who the killer was made me LMAO! I would swear to god that I used to work with that person. The characters were great. Can hardly wait to start on the next book.

I have loved this whole series but this one is especially good. And the narrator is the bomb!!

I really enjoyed this book. The plot was not as predictable as some of the other books I have listened to. I enjoyed the crime element. The performance was also great.

I wasn't blown away

I liked this book just ok. I tend to enjoy romance and mystery novels, but this just felt a bit low on plot and high on unnecessarily long sex scenes. Narrator was very solid, and I would definitely try another Rachel Gibson book to see how it compares.

Rachel Gibson never disappoints! Her books are funny, entertaining and great story lines. Her characters are always interesting and relatable. I find it hard to put her books down. She draws me in every time.

What was one of the most memorable moments of Sex, Lies, and Online Dating?

I love the fact it involved mystery and romance.

Outstanding! Love her narration and she makes it so easy to follow and identify with each character.

Obviously the drama of the ending added to the excitement of the story line.

Rachel Gibson never disappoints. This book was great. I was wrong on the Serial Killer too.

I loved reading this book introducing four fabulous female characters , therefore added this to my library. Although I can get round the American accent of Kathleen Early, her male put on voice in this book is atrocious and more than a little distracting. However and all that said, it’s still a little black dress book and easy listen

Ok romance but a bit forgettable

Writer h is dating online to get material for her next book, while detective H is pretending to be an online dater to find a female serial killer. He suspects that writer h is the killer and so continues to date her to further investigate - while at the same time fighting his developing feelings for her.

I enjoyed this book. I think I did. But the problem is that I did not write my review immediately after finishing the book and then I went on holiday and now I simply cannot remember much about it. Which sort of sums up the book. Enjoyable but forgettable. It's a good romance, it has a few plot weaknesses but they are not enough to spoil the book. I am pretty intolerant in regard to audio books as they take so many hours to listen to, therefore I do not hesitate to delete a book half way through if it does not keep my interest. I listened to this book to the end so I must have been enjoying it. I just cannot remember it, which is sort of wierd.

Maybe I am just getting old. However I have to conclude that this book is worth a credit. I guess the great thing about forgetting it so easily is that I can listen to it again soon and it will be like a whole new book!