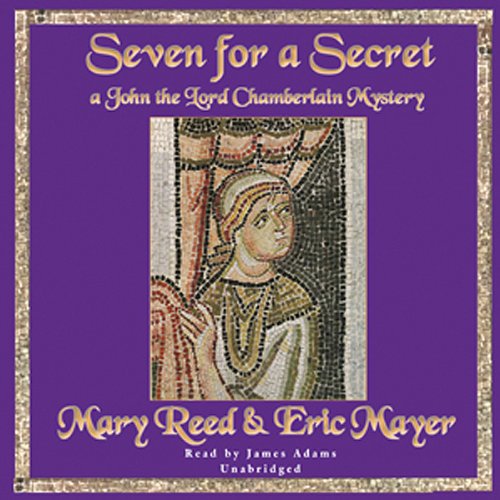 Seven for a Secret

As Lord Chamberlain, John spent his days counseling Emperor Justinian while passing the small hours of night in conversation with the solemn-eyed little girl depicted in a mosaic on his study wall. He never expected to meet her in a public square - or afterwards, to find her red-dyed corpse in a subterranean cistern.

Had the mysterious woman truly been the model for the mosaic years before, as she claimed? Who was she? Who wanted her dead and why? The answers seem to lie among the denizens of the smoky streets of that quarter of Constantinople known as the Copper Market, where artisans, beggars, prostitutes, pillar saints, and exiled aristocrats struggle to survive within sight of the Great Palace and yet worlds distant. Before long, John suspects he is attempting to unravel not just a murder but also a plot against the empire.

©2008 Mary Reed and Eric Mayer (P)2008 Blackstone Audio, Inc.
"The authors get everything right in their latest historical. The story is fast paced, the tensions between characters well portrayed; the ending leaves the reader clamoring for more." ( Library Journal)

Very well drawn characters and an excellent sense of place make this book an enjoyable. It illuminates a period of time that hasn't been overly exploited by popular culture. The mystery part of the book was very good:)

This book really fascinated me, as its theme was about a woman who appeared in a mural. It shows research into how murals are made, but in the meantime, the book itself is a mural, with each element being one little piece of the puzzle, but leaving the reader unsure where it fits into the puzzle. I thought the book was excellent in its portrayal of the period and of the way it drew out the mystery. Highly recommended.

Ends in a whimper

This was my first John the Eunuch Mystery and by the end I was a bit lost about who and what John was and who his family was.For instance, it wasn't explained about how and when John had become a eunuch until far into the book. While authors shouldn't drown the reader in back story, it might have helped the reader understand his reaction to other eunuchs and his relationship to Cornelia. I think it might pay to start at the beginning of the series.

I enjoyed the story until the end, which was more than disappointing. The plot includes intriguing crimes(which do get a bit confusing by the end) and lots of questionable characters. The finale doesn't do the rest of the book justice. It ends with a whimper. I might try an earlier book in the series because I did enjoy the setting and the characters.