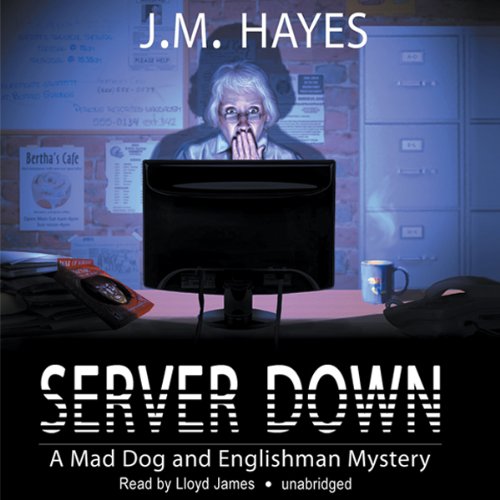 Attending the Yaqui tribe's Easter Ceremonies in Tucson should be a dream come true for a Cheyenne-wannabe-shaman like Mad Dog. But immediately after his arrival, he is accused of being a witch. Moments later a policeman is murdered, and suddenly Mad Dog is the target of a city-wide manhunt. Mad Dog's niece, Heather English, comes to Tucson to try to arrange a peaceful surrender or clear her uncle by finding the real killer.

Back in Kansas, someone has blown Mad Dog's house off the face of the Great Plains. Sheriff English, investigating that crime, learns Mad Dog has been playing a massive online game: War of Worldcraft. There, a vampire wizard has been tormenting him, and Mad Dog claims the creature has reached out of the game to come after him in the real world. The sheriff isn't convinced...until he begins receiving threats from a vampire wizard on his office computer.

A fun way to make the miles pass

I must mention that this plot is a bit bizarre, and it is very helpful if you don't think too hard about whether all these things can actually be done using the computer, but I know that 90 percent of them are possible, so I'll allow the rest.

Mad Dog finds himself the target, the victim, and the fall guy for a murder. He's away from home, visiting New Mexico to watch an Indian ceremony, and the first guy he meets starts a dispute. The cop who shows up hears a story that's totally wrong, and Mad Dog tries to defend himself, only to find himself looking at the cop's corpse as his assailant commits murder and vanishes into the darkness.

Now a suspected cop-killer, Mad Dog is afraid to surrender for fear of being shot outright. His only allies are his wolf, Hailey, who is wandering loose and showing up whenever she feels the need, and his niece, who is also visiting town.

Heather and her host, a teacher, become embroiled in this mess as she tries to intercede, using her very own deputy badge as credentials. You see, her dad is the Sheriff back in Kansas, and she's had some training and worked for him periodically. Instead of clearing Mad Dog, she becomes part of the problem and finds herself a wanted woman, and later, a target.

Mad Dog's house in Kansas has been destroyed by fire, the Sheriff's office gets damaged by a bomb, and a lot of strange things are happening. Sheriff Englishman is semi-disabled at the moment, recovering from a gunshot wound, and restricted to a walker to get around. His dispatcher and general office crank, Mrs. Krause, has been using the county computer to play a role-playing game online after hours, particularly late at night when she can't sleep. Now the game seems to be coming to life, with the screen character referring to real events and threatening all of them by name.

The story is well-read, fast-moving and very suspenseful. It certainly makes me think twice about playing any online role games.

We enjoyed this book. The characters were interesting. Although it was fairly well plotted the writing was somewhat light hearted for a mystery. Kind of a cross between comedy and mystery. Some of the ideas (like the main plot device) would have been interesting to explore in depth but this not a book you can take too seriously.