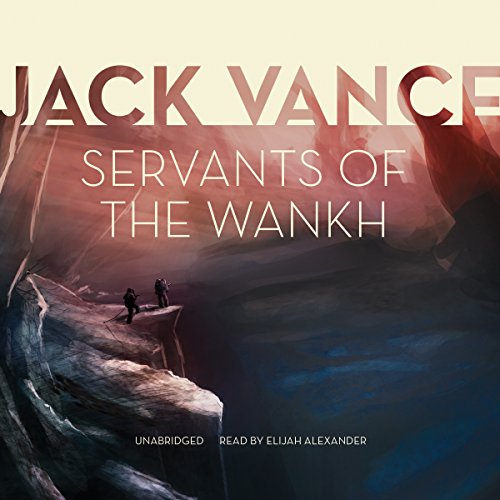 Marooned on the strange planet Tschai, Adam Reith agreed to lead an expedition to return the princess Ylin Ylan, the Flower of Cath, to her homeland halfway around the globe.

Monsters of land and sea lay before them as well as beings both human and alien who might rob, kill, or enslave them. Tschai was a large planet - an ancient planet - where four powerful alien races struggled for mastery while humans were treated as pawns; nothing would be easy for Reith on this journey. But the girl's father was enormously wealthy and her homeland technologically sophisticated.

If Reith was ever to obtain human aid in returning to Earth, where better than Cath? If only he could get there...

Servants of the Wankh, complete in itself, is the second volume of Jack Vance's masterwork interplanetary saga.

Elija Alexander is a Madman!

The Narrator makes this book come alive! He gives new dimension to each character. No exaggeration.

What other book might you compare Servants of the Wankh to and why?

Jack Vance is a unique voice in Science fiction/ Fantasy. His imagination in building complex, baroque worlds, and exotic characters, is like no other. Fans of The Dying Earth will want to read this one, too

Elijah Alexander is a wonderful narrator for the stories, and does every character with distinction and personality.

Yes. This is book 2 of the 4 novels comprising Planet of Adventure

I sincerely hope that Audible will publish the remaining novels in this series. And I hope to see more audiobooks by Jack Vance.

A great listen. Vance has a delightful way with words. bit hard sometimes to keep track of all the exotic characters and names but an interesting story of what it could actually be like to be stranded on an alien planet. The narrator was also great.