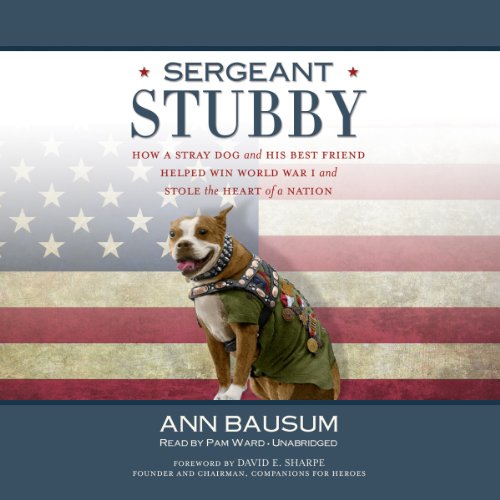 Told for the first time, here is the story of a stray dog who eventually became affectionately known as Sergeant Stubby, the most famous war dog of World War I. Beloved award-winning children's author Ann Bausum brings her friendly writing style and in-depth research to her first book for adults.

Stubby's story begins in 1917 when America is about to enter the war. A stray dog befriends Private J. Robert "Bob" Conroy at the Connecticut National Guard camp at Yale University, and the two become inseparable, eventually crossing an ocean and going to war together. What follows is an epic tale of how man's best friend becomes an invaluable soldier on the front lines and in the trenches, a decorated war hero, and an inspiration to a country long after the troops returned home.

What disappointed you about Sergeant Stubby?

The narrator was distracting, using entirely the wrong tone for the serious topic. Also, the writing was rather puerile. Multiple times the author over-sized the word "literally," and the narrator's obvious amusement over the weak-but-oft-repeated joke was infuriating. Yes, it's a story about WWI, we know that they are "literally" in the trenches. It's not funny. And with hundreds of thousands of people dead, it's not an appropriate joke either.

The foreword, written by the grandson of Sgt Stubby's owner, who is himself a veteran suffering from PTSD, was probably the best part. Heart wrenching, personal, vulnerable, uplifting, and warm. That section also had a better narrator. Wish that guy had done the whole story.

She used a light, jovial, almost sing-song tone, entirely inappropriate for a story about a war. She almost sounded happy, like she was telling a joke, when reciting gruesome casualty numbers. It was highly distracting and occasionally infuriating.

I was really looking forward to this story. I loved the foreword. I barely made it through the main narration.

It was alright. There are better dog war books. If you want to read a much better book read No Better Friend by Robert Weintraub, an incredible story about a WW2 POW and a dog who was also a POW.

Superbly written and researched story.. Pam Ward is perfect as always narrating this moving and heartwarmingly stubby tail..or tale? lol p.s. This is a love story between a dog and his human solders.Its about things like heroism and selfless love .About bringing laughter ,affection and adorableness to others during hard times so they will cry a little less .About throwing yourself into danger for what is true to your heart and mind. It is Not a treatise on the horrors of war. Not a sanctimonious liberalism that pours salt on wounds to show that pasifism and accommodation is best after all. Not a narrow intellectualism that fanatically focuses only on the terrible while remaining stubbornly ignorant to the truth that its during the most evil times that the greatest light of spirit and love and virtue is often shown and born and incarnated. For the previous reviewer I suggest "all quiet on the western front "and leave silly books like this for ignorant sentimental romantics like myself and the majority of the human race who blessedly lack a modernist education. for all you fellow fools out there, this story as well as the new animated movie of it will warm your silly big heart to its rim.😀 "when it is dark enough you can see the stars" p.p.s you will also love "Horrie the war dog".

I picked this up after seeing the recent animated movie "Sgt. Stubby". Ann Bausum did some solid research for this audiobook. The author is very up-front about what she knows and what she can only assume in trying to fill in the blanks in Stubby's history and travels, which I appreciated. It really goes to show how much historical record-keeping has changed over time! It's a good way to get your feet wet with WWI history, too - well-scoped in reviewing major events while keeping most of its focus on Sgt. Stubby and Conroy. In short, if a quick read about the WWI and post-war journeys of a soldier and his dog sounds interesting to you, I would definitely recommend this book! #WorldWarI #UnlikelyHero #tagsgiving #sweepstakes