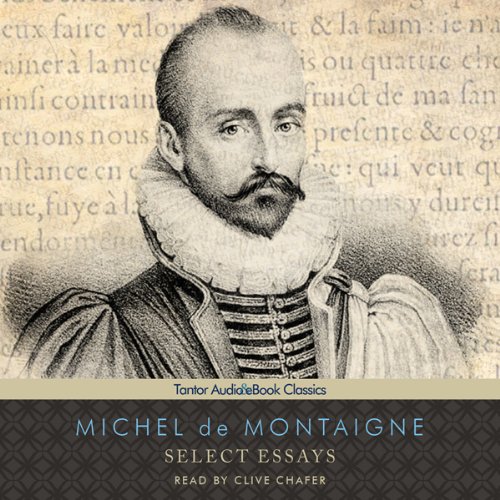 Michel de Montaigne, one of the foremost writers of the French Renaissance and the originator of the genre of the essay, wrote on subjects ranging from friendship to imagination, from language to conscience. This collection includes 22 of Montaigne's essays, including "Of Prognostications," "Of the Custom of Wearing Clothes," "Of Pedantry," and "Of Friendship." Throughout Montaigne's writing, he approaches his subject matter with rationality and skepticism, constantly searching for truth and inquiring into the nature of the human character. Montaigne's essays have been widely read since their first publication by such great writers as Shakespeare and Ralph Waldo Emerson and continue to resonate for modern audiences. This edition is the translation by Charles Cotton.

I cannot understand why an audiobook would be translated from Middle French to some ancient version of the English language. Dear translator, since your audience does not include people like Shakespeare, but rather Millennials, Baby Boomers, and other people of the sort, methinks your translation to be garbage. Drop the methinks and the betwixts, and you’ll audiobook will be better.

Sucky performance kept me from finishing the book

The narrator was so flat that it was impossible for me to listen to the dense text and hear anything other than a wall of words. I can't really comment on the content because after a single chapter I had to shut it off or fall asleep while driving.

I revere Montaigne and was delighted to see a selection of his essays free on Audible Plus. The fact that this is a century old translation is not, for me, a problem. Cotton was the standard for many decades, and I looked forward to a less colloquial take than, say, Frame. But this is nearly un-listenable. The monotone, rushed delivery is bad enough, but the constant intrusive "quote/unquotes" is beyond annoying. Yes, Montaigne weaves classical quotations in constantly, but this reader (unlike others) never figured out how to deal with this.

If you read The Guardian, you’ve got to read this

“My kingdom for a horse,” is just one of the many familiar motifs that come shining through this volume of selected essays. Very disparate and, it must be said, of varying interest, the quality of the writing and translations are always excellent. de Montaigne informs so much of what is now English literature and the style and type of what we now know as ‘non-fiction’ literature, it is really good to go back to the very basics of this genre. A really enjoyable read and not just for the occasional brilliant insights and familiar flashes that illuminate the pages.

What should be stimulating is rendered unlistenable by a reader who sounds like a computer.