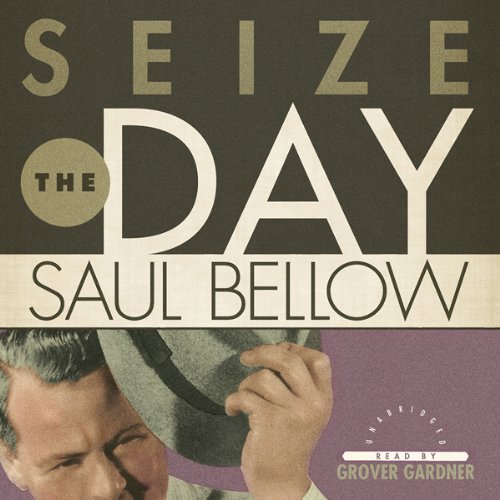 Fading charmer Tommy Wilhelm has reached his day of reckoning and is scared. In his forties, he still retains a boyish impetuousness that has brought him to the brink of chaos: he is separated from his wife and children; at odds with his vain, successful father; failed in his acting career (a Hollywood agent once placed him as “the type that loses the girl”); and in a financial mess. In the course of one climactic day he reviews his past mistakes and spiritual malaise, until a mysterious, philosophizing con man grants him a glorious, illuminating moment of truth and understanding and offers him one last hope.

Saul Bellow (1915–2005), author of numerous novels, novellas, and stories, was the only novelist to receive three National Book Awards. He also received the Pulitzer Prize, the Nobel Prize in Literature, and the National Book Foundation Medal for Distinguished Contribution to American Letters.

©1956 1974 by Saul Bellow. renewed 1984 by Saul Bellow (P)2011 Blackstone Audio, Inc.
“It is the special distinction of Mr. Bellow as a novelist that he is able to give us, step by step, the world we really live each day - and in the same movement to show us that the real suffering of not understanding, the deprivation of light. It is this double gift that explains the unusual contribution he is making to our fiction.” ( New York Times)

read all of Bellow's work, this one...

...left me utterly frustrated. I liked or loved the other ones, but not this one.

I don’t get it. I read 9 other novels by Bellow. I love his art. But for this bland novel to be considered more important than Augie March, Humboldt gift, or Herzog has only one explanation to me. This is the shortest of his novels, so I imagine that it is the most widely read. I can’t find another reason. I never thought I’ll appraise any book by Saul Bellow lower than 5 stars, but I guess that day has come. Oh well.

A sad day in the life of a man

Today is the day of reckoning for failed actor... Failed extra turned speculator Tommy Willham.
He is a broken man trying to come to grips with an unloving dismissive father and an ex wife wants all and more from Tommy.
This is on of Bellow's sadder tales but worth while and interesting!
Well narrated and full of characters you can't help but relate to.

Seize the terrible freedom of the American Dream

“You can spend the entire second half of your life recovering from the mistakes of the first half.”

SEIZE THE DAY is a novel about Tommy Wilhelm (né Wilhelm Adler), a man who is trying to make something of his life after a series of disappointments, failures, and bad luck. A marriage on the edge of divorce and an affair on the edge of marriage (if the divorce should come through), Wilhelm’s relationship with his father, the aging Dr. Adler (a medical doctor), and the decision to invest his life’s savings in lard futures—these are the concerns of Wilhelm’s present as he tries to “make something of himself” and “find himself” in New York City. A remarkable novel by Canadian-American novelist Saul Bellow, winner of the Nobel Prize for Literature and three-time winner of the National Book Award for Fiction.

If this had been Saul Bellow's only novel, then none of us would ever know his name as a great writer. The only reason I can imagine this book gains praise is the fact that it is a quick read (or "listen" if you're an audio-book fan). I listened to all 4 hours of it, however if it had been longer then I'd have given up after only 2 hours. I found it totally dull, unremarkable and unmemorable in every way. The popularity of "Seize the Day" can only be explained by 2 words: IT"S SHORT

Though published in 1956, Seize the Day is perhaps even more relevant today. An elegy to American, white male ascendence and expectation, the story takes place over one day, in which all of the failures of the main character come into terrible focus. Grover Gardner is great, as usual, and a great choice for the work of Bellow. I consider myself one who is pretty well read in the canon of great American literature but this relatively minor book of Bellow's had escaped me. I highly recommend it.

I've always liked the way Bellow captures characters by their dress, their expressions, their manners, and this short novel has some good ones, starting with Tommy Wilhelm. But he places Wilhelm in a predicament and then leaves us hanging. When I read this decades ago, I thought it was moving. Listening to it now, I found it frustrating.

Worthy of All the Praise

I can't say it isn't a good book. It is well written and insightful. It just isn't a great pleasure to read. The lead character is so unlikeable I found myself hoping he would have a heart attack and the book would end. The rest of the characters aren't much better. It is actually something of an achievement to cram so many character flaws into one short account