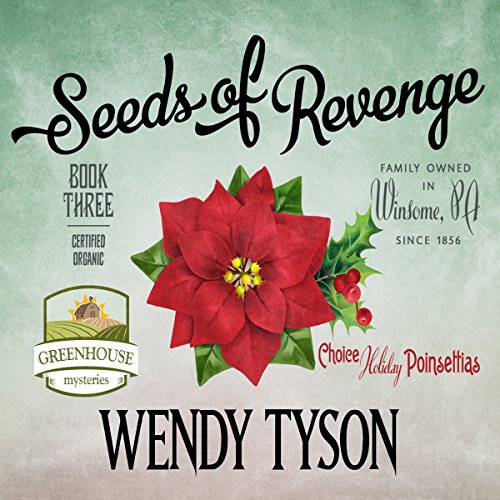 Megan Sawyer is determined to farm year-round. She's braving a December snowstorm after pitching her greenhouse greens to Philadelphia chefs when she sees a stranger stranded on the side of the road. It's Merry Chance's niece Becca, and she's headed to Winsome to sell her love potions at holiday events - or so she thinks. Merry has an ulterior motive in inviting her niece to Winsome, but her plan to reunite Becca with her estranged father goes awry when Becca's father turns up dead.

Megan soon realizes that Becca was not the only person in Winsome who despised her father. When Megan's aunt, the famous mystery author, is implicated by her novels, things become personal. Megan must follow the literary rules while sifting through the victim's sordid past, but can she uncover the truth before someone else in Winsome is murdered?

Too old for this series. Sounds as if she is working hard to keep her false teeth in her mouth. Meghan is mid thirties. Makes for poor audible experience.

Probably my favorite so far in the series . . . and the BEST part is the tee pee in Doctor Denver's back yard . . . listen and see for yourself . . . the little town of Winsome, Pennsylvania is cold in the winter and farmer, Megan Sawyer is trying to keep solvent by selling her winter crops and by running the cafe in town . . . her romance with the town's handsome Scottish veterinarian, Denver Finn gets sweeter and warmer with each book in the series . . . all the favorites continue to pop up, Grandma Bibi, Clover, Police Chief Bobby King, Aunt Sarah, and farm manager, Clay. This time Merry Chance, owner of the local flower nursery and member of the historical society has invited her niece, Becca Fox, to visit. with an ulterior motive in mind . . . to reunite her with her estranged father, Paul Fox. Things go from bad to worse, however, and the whole town is turned upside down when Paul Fox is found murdered . . . and Becca is arrested for killing him. Once again, Megan and Police Chief, Bobby King put their heads together to try and figure out who really killed Paul Fox . . . and why. This one is a real mystery . . . and a GOOD one. Pulling together the past and present in superb style and keeping me guessing until the very end . . . this is one of the BEST series I've come across, combining murder, small town closeness, romance (that is not too descriptive, leaving just the right amount to the imagination) and always making me hunger for the NEXT in the series! BRAVO!

This is an enjoyable cozy mystery with lots of twists and turns and likeable characters.