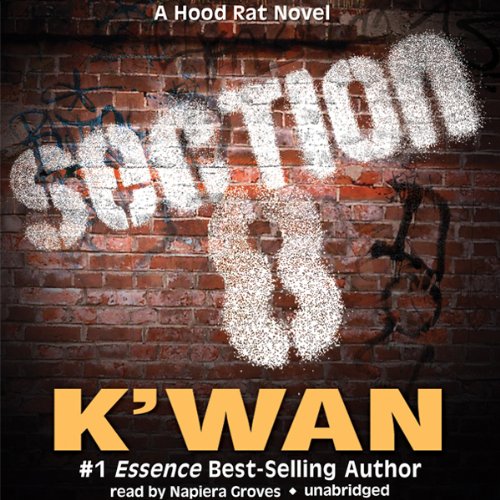 Taught by her drug-addict mother to get hers by any means necessary, Tionna's heart is cold, but she holds a warm place in it for Duhan, the father of her two sons, her on-again-off-again boyfriend since they were teenagers, her knight in shining armor. But with Dunham behind bars and everything she loves seized, she finds herself starting over in the same neighborhood that she swore she'd never return to. With her best friends, Gucci, Boots, and Tracy, she finds herself rediscovering her old life and suddenly begins to wonder if she's really cut out to be a prisoner's wife.
©2009 Urban Audiobooks (P)2009 Blackstone Publishing and Urban Audiobooks
"K'wan continues his popular Hood Rat series with yet more of what his readers expect: action, murder, betrayal, sex, more action, familiar faces, and a few surprises." ( Publishers Weekly)

The narrator was the worst!!

I love all of K'wans books I must say first, and I normally love the narrators but this one I DISLIKED!! She kept stumbling on words and you can here when she was shuffling her papers!! Bring Cary back!!

The narrator sounds like she was drunk or hella tired especially towards the end of the book. Story was good.. But definitely Hood

I love that this had music in between chapters and that it brought a large awareness to hiv but the narrator just didn't do it for me. Cary Hite can do no wrong in my eyes, he should read all of kwans books!

Good but the Sequeal is Better!

I actually listened to the sequel Welfare Wifeys first before I realized that there was a book before it. This is a good listen but the narrator just didn't live up to the job that the Welfare Wifeys narrator gave. I still suggest this book because it gives you more insight on the charactors which I enjoyed.

It took a minute for the writer to introduce all the characters, but once that was out of the way it was a very good listen, I got to where I would sit in my car and continue to listen after I got to my destination, I really enjoyed this one, I had alot of laugh out loud moments!!

This book will have you checkin' for K'wan!

This book gets all credit for starting my love affair with Urban Fiction! Once I began listening, I was instantly intrigued. I had no idea there were books like this! I had fallen out of reading and had only truly gotten back into it due to the writer's strike on TV. One day I decided to take chance a story called Section 8 and was blown away! I love how each chapter tells its own story all the while leaving you with a tidbit of info to keep in mind as the plot thickens. This story seemed to just unexpectedly pull you in each characters own triumph and dilemma and make you want to know more about their story whether it be good or bad. My favorite character was Gucci just because she was so down to earth and loyal. The interaction between her and her girlfriends felt real because K'wan truly made them individuals, flaws and all. Oh and this character Animal was the epitome of what I want in a boyfriend in my head lol. This was a great read/listen and once I was done, I had Welfare Wifey's next on deck! This may be the first book offered by the very talented author on audible.com, but it is merely scratching the surface when it comes to K'wan's catalog. Ya'll need to see about that man!!

the characters are well developed from other stories and it is random chaos. I love it! narrator does a good job, but I love Cary Hite!!!

I loved the story but the narrator was horrible.. I like how k'wans books intersect with each other..

This was a great listen! I wished it would have more a storyline ending so that the listeners know what happens to the characters. I loved "Animal" in this story. All in ALL it was was s good story.