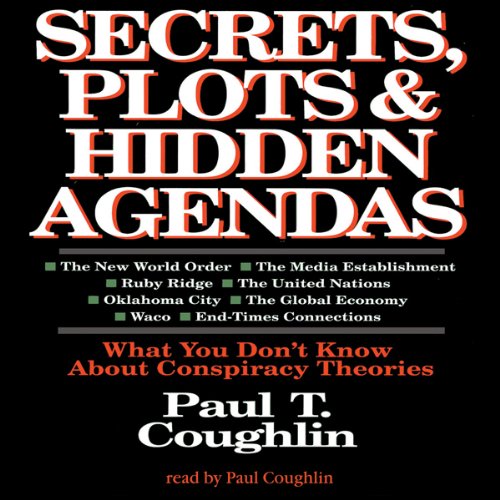 Were the government actions at Ruby Ridge and Waco "planned executions"? Has the national debt been deliberately increased to give international bankers control over the country? Is there a secret organization of top political, economic, military, and religious leaders whose goal is to control the entire planet?

The people who answer "yes" to such questions are not just extremists; they number in the millions, wear suits, and pay their taxes. News of conspiracies has spread broadly by the Internet, by declassified government reports, by prominent leaders who publicly favor global government, and by interpretations of Bible prophecy.

But what is the truth?

In this book, Paul Coughlin uncovers the facts about prevalent conspiracy theories and discusses the reasons that so many people believe them to be true.

©1999 Paul T. Coughlin (P)1999 Blackstone Audio, Inc.
"As an FBI agent for twenty-five years, including service with the FBI's Behavioral Science or 'Silence of the Lambs' Unit, it is clear to me that Paul has one open agenda: the truth. It is out there, and it is in this book." (Clinton R. Van Zandt, the FBI's former chief hostage negotiator and Behavioral Science Unit supervisor)
"Few things block unbelievers from serious consideration of the gospel more than conspiracy theories. Paul Thomas Coughlin confronts some of the more outrageous ones and vaporizes them. Of course, anyone with any sense must conclude that he is part of a giant conspiracy!" (Cal Thomas, syndicated columnist)

This is a great book that exposes the unspeakable about our government. Although I love the US; I know we have a very dark side that the media lap-dogs will never tell you about.

Would you consider the audio edition of Secrets, Plots, and Hidden Agendas to be better than the print version?

I think the audio is good, I was happy with it.

This book is from the perspective of a former Christian radio presenter. Alot of the information is good to hear from this perspective especially if you are still open minded about alot of the topics. Although I may not agree totally with the standpoint of the book I think it is well worth listening to because it gives another perspective on the conspiracies we all know and love.

It was difficult to stay focused on the narration. The material was so boring and irrelavent.

Yawn, a great book to go to asleep by (not with).

A really hard listen, my first mistake on Audible- a complete waste of a credit