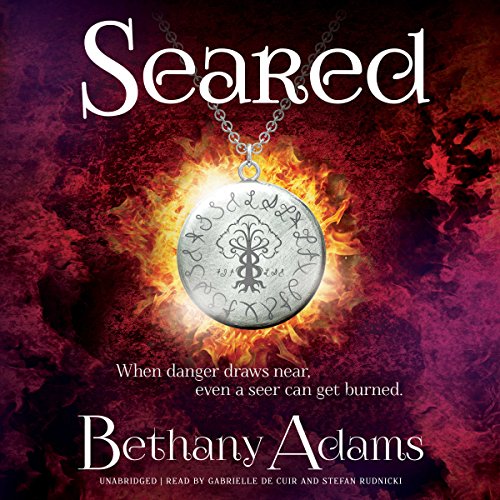 After more than 300 years on Earth, Prince Ralan has finally returned to Moranaia. But with his wicked brother Kien on the loose, the homecoming is a short one. A dire vision sends Ralan back to Earth to save his soulbonded from his dark brother. The problem? Ralan's Sight grows more erratic by the moment even as danger closes in on every side.

A woman far from home

Ever since a failed alliance ruined her family, Cora has lived on Earth. Far from discontent, her days are spent running her clothing shop and helping newly arrived fae adapt to mundane life. Then a golden-eyed prince strides into her store, trouble stalking his heels. Big trouble.

Ralan's Sight might be broken, but one thing remains clear - stopping Kien will mean Ralan's death. So how could the Gods choose now to introduce his soulbonded? As Ralan and Cora search for Kien, their relationship grows stronger. Unfortunately, so does the threat. Now Ralan must choose between his own life and the fate of all their worlds.

Self imposed exile for 300 years on Earth, Prince Ralan returns to Moranaia for the health of his daughter. Ralan's gift is seeing but has given has neglected his gift for so long, it not only doesn't work, but he doesn't trust it - When a vision returns Ralan back to Earth to save his soul bonded his evil brother Kein, Ralan's visions grow more erratic and the once "always confident and cocky" prince becomes insecure.

A failed alliance and arranged marriage once ruined Cora's family and she content to spend her days on earth, until she meets the arrogant Prince Ralan, and he's not used to people not doing what they're told.

As Ralan struggles with a apologies and understanding of why his gift of seeing doesn't always work - he is sure of one thing. stopping his brother Kien, means the end of his own life. It's not fair to be introduced to a soul bounded before you die especially with the added responsibility of a 6 year old daughter - The Gods can be so cruel -

I truly enjoy the twists and turns of this book - Ralan definitely came off a bit arrogant as you think a prince would, but I was hoping Cara would take him down a couple of pegs more - otherwise, I really did like this book.

Both narrators have the problem of making the characters sound like teenagers and old people. It is often hard to respect the characters with those voices. Gabrielle de cuir is the worse although Stefan really should not making women sound mindless and breathless. I really hate the voices she does. That being said not all are bad such as that Lyr and the little girl. Those are the only two voices appropriately voiced.

The story touches on things that have an emphasis placed on them but is not addressed in this story.

I am loving this series. the storyline is well done, keeps me hooked. The narrator is great.

Excellent story!! It leaves you riveted to your seat and wanting more when the book is done!! I have no better words to say than the fact that I just love the entire series! I would recommend it to anyone who asked and even if they don't I still would!!