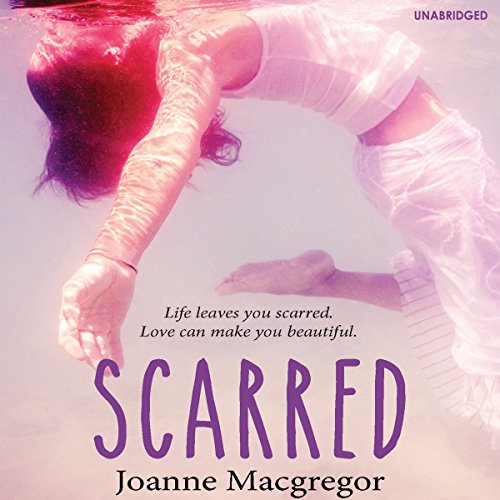 Life leaves you scarred. Love can make you beautiful.

Sloane Munster had the perfect life - until she didn't. Now 17-year-old Sloane is trying to reboot her life after a serious accident left her badly scarred and emotionally traumatized. Starting her senior year at a different school, she recognizes Luke Naughton, a swimmer whom she once had a crush on, in her new class. But when she smiles at him, he glares back with revulsion, and she's sure he's disgusted by her ugly scar.

No matter how hard she tries to keep out of his way, life keeps bringing them together, and despite misunderstandings and guilty secrets, the chemistry between them sparks. Meanwhile, tensions are mounting at their school, where bullying is rife, and Sloane is not the most deeply scarred person.

Sharp with bittersweet humor, Scarred is an intense, beautiful, compelling story of life, death, damage, and fighting for love against all the odds. A great listen for fans of Sarah Dessen, Stephanie Perkins, and Abbi Glines.

©2015 Joanne Macgregor (P)2016 Audioshelf
Contemporaneo Adolescenti e Ragazzi
Mostra di più Mostra meno
"I was so in love with the writing and the style that I literally couldn't put it down. The author made me feel like I was Sloane, feeling all those emotions and the struggles she had, she made you feel so drawn to the twist that it was MIND BLOWING." ( Florals and Dragons Books Blog)
" Scarred is more than another young adult tale of bullying, insensitivity and the cruel callousness that runs rampant today. This is a tale of forgiveness, of healing and of the awareness that one's individual pain is shared by many." ( Tome Tender Book Blog)

The ending is just STUPID

I am an adult that enjoys the occasional YA story. This one had a predictable story line but was okay, UNTIL THE ENDING.. that last chapter had to be one of the stupidist I have ever encountered.. and I have read thousands of books.. Joanne Macgregor, you should be ashamed.. you are to good an author to have produced that last chapter...did you just get tired of writing the story and so ended it as easily as possible? I was screaming out loud at the end.. "You have got to be kidding me.."

The narrator is the only thing that saves the book

The first part (like 8 chapters) is her complaining about the scar on her face, then is about how she likes this boy who seems to be disgusted by her scar and then finally at the far middle they explain what happened to her face and how they both connect, the end has some action and I guess it was ok, but the main character is just so needy and keeps complaining about her scar and how she is not pretty anymore.

What did you love best about Scarred?

I loved this book! Initially drawn by the beautiful cover and the title, then intrigued by the first chapter, where the reader is introduced to a scarred and self conscious protagonist, I read on until the dramatic climax. I loved the overarching theme of physical and emotional scars borne not just by the main character, but in one way or another, by many of the other characters in the story. It was rewarding to discover that ultimately Sloane does not allow herself to be defined by her scar(s).

What was one of the most memorable moments of Scarred?

Intrigued by the scar, slashed across Sloane's face, which she is trying to cover with make up, the reader is impatient and curious to read beyond the first chapter to find out how she got it (and why it appears to be particularly 'repulsive' to classmate, Luke). When the backstory is eventually revealed in a climactic, memorable and pivotal chapter, the reader has clarity about the anguish and raw emotion and misunderstanding going on in the heads and hearts of the two main characters.

It is romantic and rewarding when Sloane and Luke finally clear the air and move on to develop a sweet and touching relationship. I loved the scene where, on a day and time between heartache and misunderstandings, Luke takes Sloane to volunteer at the dog pound where they spend the day doing something so simple but worthwhile while getting to know each other. It is a day and a 'date' they both deserve, a lull between the events and knowledge that loom which could possible doom their relationship.

This story deals with some heavy and topical issues, resulting in many moving moments dealing with death of a family member, bullying, physical and emotional scars etc and how these affect relationships between friends, classmates, parents and children, and sweethearts. I was particularly moved when after a powerful truth-telling scene with Luke, Sloane's fleeting happiness comes crashing down. Alone and numb she says "I feel brittle, like if I move too suddenly I might shatter".

Even though this story deals with some weighty issues (so much more since they are being faced by teens), the writing style does not feel weighty. Macgregor does a good job of keeping the story moving along with likable and/or believable characters, amusing situations which offset the tense moments and some very vivid imagery. The story flows in an easy and entertaining, yet very compelling way giving a sense that because of or in spite of the scars life can sometimes deal, it goes on. Teens still do and say and live as teens do inside of high school and out, and Macgregor provides some laugh-out-loud funny moments and dialogue, and a protagonist who has admirable doses of wit and sass. Kelsey Egan and Richard Lothian do a great job narrating this relevant and romantic read .

The plot wasn't to bad but it was definitely written as though a tween wrote it. It's a bit messy and the transitions weren't very good. actually I'm not even sure why the male perspective was even added it did nothing to add to the story, it barely gave any kind of perspective.

I did like the beginning but if this wasn't a lesson on school bullying there was no need for the end. It could've gone more indepth about bullying especially since this book is about all types of scars but it focuses to heavily on the love story which kinda falls under the Rimeo and Juliet drama of extreme teenage love. Which is also why I think a tween wrote this.

It's kind of a mess and I feel like the real message gets lost by the ending which is sad since the plot wasn't terrible.

I think this book has great potential to be amazing and deep.

I really enjoyed it. The raw emotions, the cruel kids, love triumphs in the end. I still want to give the teacher a piece of my mind.
Such a pity that it is a true reflection of school today

This was intense and sad and pretty well written. Sloane was pretty brave, considering all the people at school making fun of her and her teacher being a condescending asshole. Plus, Luke was pretty harsh toward her too. I get that he was hurting from his own loss, but it wasn't Sloane's fault and she has no parents and is permanently injured. I like that she stuck up for herself and LJ, even though he was super creepy and mean. There were a few moments where I was worried who would live through the book. Sloane is a better person than I am, especially near the end. There were two narrators, which I always love because it helps keep the story moving. Both narrators did a great job of capturing the emotions of the characters and the horror of the situation they are put in. It was a quick listen, but I definitely enjoyed it.