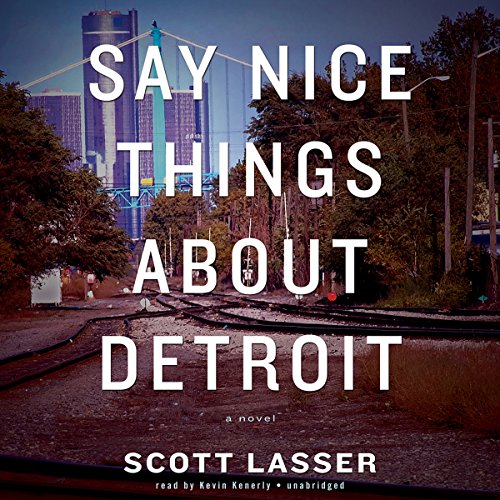 Say Nice Things About Detroit is a novel about second chances from a writer of “stirring, poignant, and quietly profound” work (Wally Lamb).

Twenty-five years after his high school graduation, David Halpert returns to a place that most people flee. But David is making his own escape - from his divorce and the death of his son. In Detroit David learns about the double shooting of his high school girlfriend, Natalie, and her black half-brother, Dirk. As David becomes involved with Natalie’s sister, he will discover that both he and his hometown have reason to hope.

As compelling an urban portrait as The Wire, and a touching love story, Say Nice Things About Detroit takes place in a racially polarized, economically collapsing city that doesn’t seem like a place for rebirth. But as David tries to make sense of the mystery behind Natalie’s death and puts back the pieces of his own life, he is forced to answer a simple question: If you want to go home again, what do you do if home is Detroit?

Scott Lasser, a native of Detroit, has worked for the National Steel Corporation and Lehman Brothers. He is the author of several novels, including Battle Creek, and currently lives in Aspen, Colorado, and Los Angeles, California.

©2012 Scott Lasser (P)2012 Blackstone Audio, Inc.
“This is a sharp, clear portrait of who we are now. Scott Lasser continues to shape a very distinct literary map.” (Colum McCann, National Book Award-winning author)
“In a city famous for ruin, a pilgrim’s tale of rebirth and renewal: Scott Lasser’s narrative gifts are abundant, his characters a compelling and convincing lot.  Say Nice Things About Detroit, while true to life’s damages and sadnesses, is nonetheless a joyous, vital read.” (Thomas Lynch, National Book Award finalist)
“You’ll love Scott Lasser’s style. His book spans a few years but keeps moving with dialogue that’s natural and alive: whites and blacks in Detroit, a setting you come to know and can feel what it’s about. I know; I’ve been here most of my life.” (Elmore Leonard)

I love my hometown! So when I saw this book, I was immediately attracted to the title. I had zero expectations for the book. I was pleasantly surprised by the book and found myself enjoying the story quite a bit. I enjoyed how the story developed and the plot tended to get a bit thicker as time went on. This one is worth your time.

Maybe I liked it because I grew up in Detroit

Good characters and good story, with interesting background on Detroit. Look forward to more from this author.