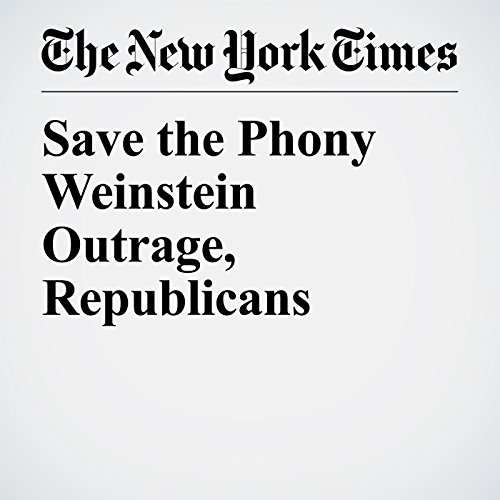 Say this for Donald Trump: When it comes to sex, he’s less of a hypocrite than Harvey Weinstein. Until Weinstein’s abrupt downfall amid proliferating accusations of sexual assault and harassment, he posed as a backer of women’s rights. He made films with substantive female leads (82-year-old Judi Dench joked that she’d tattooed his name on her butt in gratitude), donated money to politicians supporting feminist policies and contributed to endow a chair at Rutgers University honoring Gloria Steinem. He even attended the Women’s March at Sundance. Yet privately, he appears to have been a sexist ogre, using his power to exploit and humiliate women. After the truth about his conduct was widely revealed, he was cast out of his professional community and rendered a pariah.

"Save the Phony Weinstein Outrage, Republicans" is from the October 16, 2017 Opinion section of The New York Times. It was written by Michelle Goldberg and narrated by Kristi Burns.