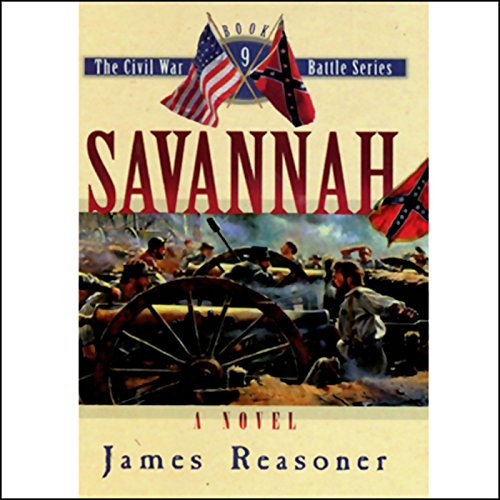 The continuing saga of one family trapped in the crucible of the Civil War.

Following the defeat of Confederate forces at Chattanooga in November 1863, the battered Rebel army, including a bitter Cory Brannon, retreats slowly toward Atlanta. A large Union army led by Gen. William Sherman is marching to the coastal city of Savannah, laying waste to the territory through which it passes. Meanwhile, the Brannon family farm in Culpeper County, Virginia, is now behind enemy lines, the great plantation house in ruins. Titus is off fighting with Mosby's Rangers and Henry has been removed as sheriff. To everyone's surprise, Cordelia is courted by one of the Union officers, a Yankee she finds herself unable to hate. As Cory is trapped in Savannah, surrounded by Sherman's marauding hordes, despair grips the Confederacy. Fractured and defeated at every turn, the nation asks itself how much longer it can continue to fight.

Once again the author does a nice job of weaving several character threads together to make a good story -- some in Texas and others in South Dakota with the union army in 1964/1865 as the climax to the war takes place. There is description of the fall of Atlant as well as Savannah. One aspect of this series that I enjoy is that the author details battles in the war that are not necessarily as well known. A good example in this story is the battle of Nashville/Frankiln which crushed Hood's army.

The end is near..

As I head into the last book of the series I can honestly say that I’ll miss the Brennon family and their convenient connection to so many key historical figures and events surrounding and leading up to many historical battles that occurred during the Civil War. Mr. James was pitch perfect in his narration.

This series has brought such and understanding and a depth of sorrow for what America went through during the Civil War.

The only fault I have found in all 9 books so far is technical. In both Shenandoah and Savanah small sections would repeat.
Many historical fact interlaced with personal stories makes a great listen.

Long winded for a short ending

I chose to listen to this book wanting to know more about the details of the Civil War around Savannah. What I got was 8 hours of mini personal stories of individuals trekking all over the US. The portion of the book that was actually about Savannah was roughly 3 minutes out of a 8 hour book. That 3 minutes was at the very end. That 3 minutes didn’t give a lick about details of what happened with Savannah, nothing about Fort Pulaski being attacked. I don’t recommend this book unless you want to wander around in personal civil war stories.

Things are not going well for the South

Sherman is making his way to Savannah and Titus is not a happy chappy and making life as miserable as he can for everyone he runs into. The rest of the Brannon's are making the best of things but its clear that unless there is a miracle the Confederacy is doomed. The way James Reasoner has conveyed the sense of hopelessness is well done - he doesn't go for the dramatics but the whole narrative has a cast of sadness throughout it lightened only by the recounting of life in Texas.

Lloyd James continues to excel and there is no end to his accents. Such a good narrator.

Tinged with sadness as the Confederacy is being brought to it's knees. Brilliant series