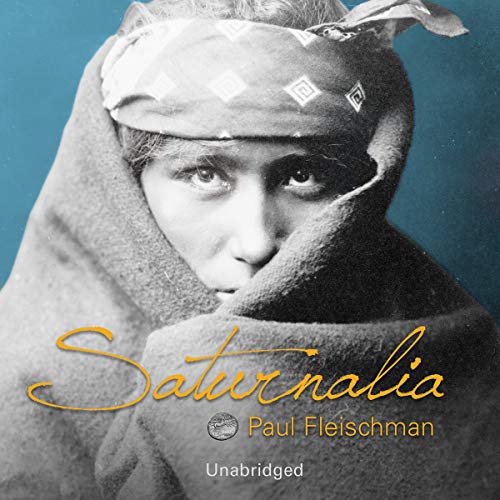 It is December 1681, and the words of Mr. Baggot, the tithingman, terrify young William. William is living a strange double life. By day he is a printer’s apprentice living in a white man’s house. By night, he is Weetasket of the Narraganset tribe who must risk Baggot’s wrath to search for his lost brother. Then comes the winter celebration of the Saturnalia - the ancient Roman holiday on which masters and slaves trade roles. Will William’s secrets be revealed? And what dark deeds of others will be brought to light on this fateful night?

©1990 Paul Fleischman (P)2013 AudioGO
"Delightful.... Fleischman’s entertaining caricatures of such colonists as the piggish wigmaker and his devious, brazen manservant will bring many chuckles as the plot moves seriously through one narrow escape from danger after another. Readers enjoying a challenge will read straight through this short book and learn of prejudice in colonial life as well as bravery and character." ( Children’s Literature)
"Melodious writing, revealing images, and a colorful, outlandish cast characterize this unusual novel that revels in surprises." ( School Library Journal)
"Rich and alluring.... With exception[al] skill, Fleischman evokes an aura of days gone by through a series of interrelated vignettes. Offering lyrical prose, resonant themes, and a tragicomic tone, this story will captivate those who seek a challenging and enlightening read." ( Publishers Weekly)