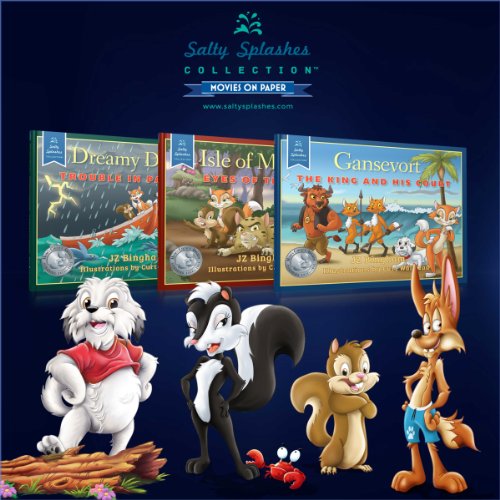 Meet the Salty Splashes - a cast of cartoons characters loaded with spunk and personality. They have a knack for finding comical adventure all around their cool, beachy world - a fictional version of the magical coast of central California, America's Riviera. Hear their lyrical, rhyming stories come to lifewith surf music, animated dialogue, and funny cartoon sound effects. It's the most fun you can have in one hour without getting into trouble!

The first three books in the Salty Splashes Collection a repackaged in one audiobook for an exciting, fully dramatized hour of humor,action, and adventure. Colorful narrative and voice-overs by Shawn Willms, accompanied by author J. Z. Bingham, bring this cartoon world to life with character acting, continuous sound effects, and music. Dreamy Drums: Trouble in Paradise introduces our cartoon cast asSammy the spunky puppy is delivered to his waiting family and their sunny village by the sea. Sammy soon instigates a series of antics that lead to anunexpected adventure at sea. Isle of Mystery: Eyes of the King finds our cartoon cast stranded on a seemingly deserted island, where they have spooky encounters with yellow-eyed island denizens before making a friend and settling down for the night with a warm campfire. Gansevort: The King and HisCourt steps up the action as the cast's plan to sail back home is interrupted by an unexpected meeting with the island's ornery king and his tribe. Their clever plan of escape is loaded with humor and a climactic ending.