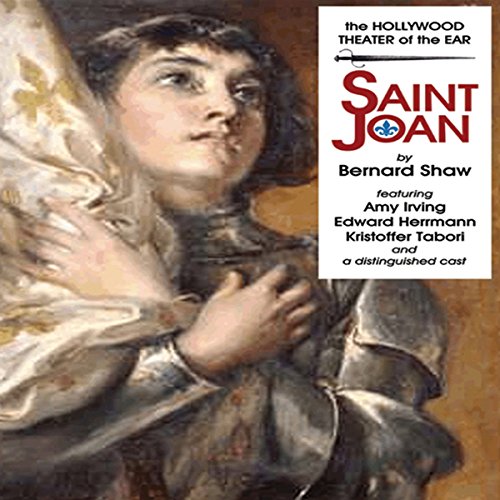 With Saint Joan, George Bernard Shaw reached the height of his fame as a dramatist. Fascinated by the story of Joan of Arc but unhappy with "the whitewash which disfigures her beyond recognition," he presents a realistic Joan at war not just with British invaders but with realpolitik. This is a masterpiece of the theater of ideas, presented in the most eloquent, vital, human, and moving terms. Blackstone commissioned this production from the award-winning Hollywood Theater of the Ear.

“St. Joan contains not only some of the playwright's most acerbic writing but also his most poetic.” (New York Times)

“...[T]he most fervent thing Shaw ever wrote – the play that is poetically the most moving, that comes closest to high tragedy, a work inspired with a truly elating sense of justice; a work in which the mature rationality of en esprit fort that has outgrown the confines of the eighteenth and even the nineteenth century, bows before sanctity; a work fully deserving its world fame.” (Thomas Mann)

Amy Irving gives a stunning performance as the title character in this outstanding recording: innocent and charismatic in the beginning, stricken and horrified at the end.

One of the interesting things to note, listening to this, is how Shaw manages to convey the great sweep of events by focusing just a bit off-center. Where Shakespeare would have a band of soldiers, armed to the teeth, battling each other in front of the audience, Shaw conveys the impending sense of battle in a scene that focuses on whether a banner is stirring in the wind.

The trial is riveting.

Tone it down already

No need to deliver in Disney character manner, actors. Allow Shaw's words to speak for themselves. Amy Irving should have toned it down. Or since Joan was a teen, why not cast a teen voice actress?

I cannot say enough superlatives about this production. Amy Irving, is a truly wonderful Joan, so articulate and yet human. She coveys the pathos as well as the humor and irony of Shaw’s Joan. The rest of the cast is perfect, as is the production.