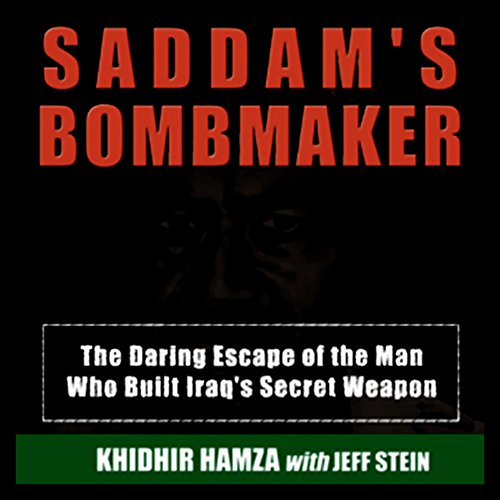 Khidhir Hamza, the Iraqi scientist who designed Baghdad's nuclear bomb, tells how he secretly developed the bomb with the cynical help of U.S., French, German, and British suppliers and experts and kept it hidden from U.N. inspectors after the Gulf War.

Dr. Hamza also presents a startling, unprecedented portrait of Saddam himself, his drunken rages, his women, his fear of germs, and his cold-blooded murder of underlings.

Saddam's Bombmaker is also a saga of one man's journey through the circles of hell. Educated at MIT and Florida State University, dedicated to a life of peaceful teaching in America, Dr. Hamza relates how the regime ordered him home, seduced him into a pampered life as an atomic energy official, and forced him to design a bomb. The price of refusal was torture. The tale of his escape, his first bungled contact with CIA agents, and his flight abroad will keep listeners riveted toward a climax worthy of a well-crafted spy thriller.

I was initially fascinated with the story until I did a brief internet search of Khidhir Hamza and found out that he has been largely discredited as being a significant player in Saddam's nuclear program. Yet I continued to listen to this audiobook and enjoyed it for what it is, historical fiction.

Would you ever listen to anything by Khidhir Hamza and Jeff Stein again?

The book was very well written, yet I would not listen to other programs by these authors because I don't think either one of them has any credibility.

What does Robert Whitfield bring to the story that you wouldn’t experience if you just read the book?

The narrator was excellent, his performance was consistent and fluid.

I watched the movie Devil's Double about Uday Hussein's double, who has also been discredited and enjoyed it. I would see this movie.