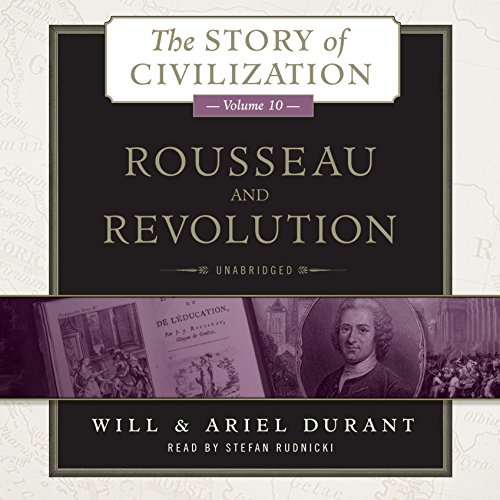 A History of Civilization in France, England, and Germany from 1756, and in the Remainder of Europe from 1715 to 1789

The Pulitzer Prize-winning volume on European civilization by acclaimed historians Will and Ariel Durant.

Rousseau and Revolution, the 10th volume of the Story of Civilization, ranges over a Europe in ferment, but centers on the passionate rebel-philosopher Jean-Jacques Rousseau, the great exponent of the romantic impulse toward self-exploration and social revolt, who contended with the great rationalist Voltaire for the mind of Europe. Rousseau condemned civilization as a disease, glorified the noble savage, proclaimed to the world with equal intensity his own love affairs and the natural rights of man, and became the patron saint of the revolution and the worldwide social upheavals of two centuries.

The Story of Civilization series is a graduate school education all by itself.

I bought the entire 11 volume series of texts decades ago from book-of-the-month club for $40 as a deal for joining. They claimed at the time that they were a $450.00 value. The books require careful reading for anyone who wants to retain much, but they are worth the trouble. I had never finished reading them when I found, to my surprise, that audio copies exist. So, I joined Audible and was delighted that they are half-price for members. Now my $15 per month membership will buy one volume (which is actually 6 separate downloads) each month. Now I can listen and read with my texts--good to have because Kindle doesn't offer them. I did the math and figured that the audio was worth the money, and it will take me a month to digest each volume, so worth the cost also with respect to the hours of entertainment and knowledge they impart.

This series has made me wonder why my own college education didn't include all the facts, impressions, personal relationships, famous quotes, letters, social customs, and more that Durant relates about every famous person who lived at the time, not just statesmen, but also writers, composers, painters, architects, mistresses and kings and others. For instance, Dostoevsky has in at least two of his novels characters proclaiming, "Apres moi, le deluge," so I knew when i read The Idiot and The Brothers Karamazov that the characters were imitating Madame Pompadour. Besides, I am now able to answer so many Jeopardy questions!

If I didn't have the texts, I would trust in osmosis by audiobooks to educate me about this interesting period of European history. The series is the most ambitious writing ever attempted by almost a single person. The writing is simple and clear, but sends one to the dictionary sometimes, even though important footnotes are actually read by Stefan Rudnicki. His narration is fine, but I push the "back" button frequently only because I need to review the onslaught of facts.

This book and the entire series are certain to take your education to the next level.

Upon buying this audio book I immediately had a sense of betrayal. Grover Gardner is the voice of Will Durant not some dude with a voice deeper than Satan's in a scary movie!

But reservation changed to enjoyment, as the narrator truly gives the same performance as Grover Gardner, albeit a slightly deeper voice (to say the least). But he gave the subject matter every bit the reverence warranted. And he knows how to narrate! After the first 1/4 of the book, I ceased being distracted and began enjoying his narration.

This book is on the time just before the French Revolution. For semi-educated folks like myself, this book is really enlightening. After listening you truly see the French enlightenment for what it was and you recognize its impact on the American revolution (much beyond mere footnotes). You see the germination of the neoliberal disaster that has ensued over the last 50 years and you hear some of the philosophe (sp?) predicting this result...(ie. concentration of wealth etc.). You come away with a deep appreciation of the history of the time period. In a way only Will Durant can pull off - you feel yourself as part of the action during this remarkable time in human history.

Oh, and he does pull you back down and remind you that the typical lot in life for the average human being stunk! You are forever reminded that you are learning about a small minority of society. For example, the Durants are quite clear, the French Revolution was the revolution of the business class, not the proletariat.

For a brief time, 45 minutes to and from work, I lived in 18th century Europe. Of course, this is true of any book authored by Will Durant. And now, it's over. I've completed them all. Will and Ariel Durant's Story of Civilization represents two years of my life commuting to and from work. Upon completing this volume I can't help but be reminded of my own mortality. A chapter of my life is completed. Consider the final two paragraphs of this book,

"Forty years of happy association in the pursuit of history have come to an end. We dreamed of the day when we should write the last word of the last volume. Now that that day has come we know that we shall miss the absorbing purpose that gave meaning and direction to our lives.

We thank the reader who has been with us these many years for part or all of the long journey. We have ever been mindful of his presence. Now we take our leave and bid him farewell."

Thank you Mr. and Mrs. Durant. You have forever changed my life. A chapter of my life has also come to a close. My understanding of what has occurred and what may occur is forever altered. In a country where the liberal arts and history no longer seem to warrant serious study by its citizens, you educated me more than you could have imagined when writing your series over a half century ago. May the next chapter of my life reflect the wisdom your spiritual gift gave me.

Just listen to the darn books already....it'll teach ya what you didn't learn about history in high-school and college.

they just keep getting better<br />

...and better and better. For the first time in the series, I felt a stab of sadness when the book was completed. An amazing thing considering that this is a non fiction encyclopedic text book. Thank you William Durant for your Herculean efforts. You and Ariel are national treasures. 😞

Where does Rousseau and Revolution rank among all the audiobooks you’ve listened to so far?

I've been on a Durant tear and I love all their work.

Well Worth The Time

A long and insightful look into the political currents leading to the French Revolution. Best read after "The Age of Voltaire," the preceding volume in this series. They are really two halves of one long story.

Revolution of the Mind and Government

Parts of this great work had too much detail which got a little tiresome on emphasizing infidelity of poets, kings, artists, and philosophers. However, maybe that’s what the authors thought would show these people’s vices that made them more human and less infallible. Once again this is another great work by the Durants.

Rich in revolutionary knowledge through European history. Very detailed, meticulous research. The narrator is the perfect. Only small portion is directly devoted to Rousseau and his specific ideas. Lentghy but worth the time invested if you are interested in the branch of revolution.

Long Lead Up to Revolution

This is the 10th book of the 11 book excellent, integrated history, Story of Civilization series. For my review of the series as a whole see my review of “Our Oriental Heritage”. Although this is not my favorite volumes it was pretty darn good. This volume starts with the seven year war, covers Rousseau, Kant, Goethe, Mozart, Samuel Johnson, the dynamics leading up to the French Revolution are set out. The volume ends as the revolution begins. Here the best and the worst of both Rousseau and Voltaire are discussed. The writing seems quite present day, and the influences of these two poles of modern liberalism on politics today are extraordinary.

The narration is excellent, capturing the author’s quirky humor and restrained passion. I recommend this series to anyone.

Epically epic majestic sweep of pure history- ness. Great narrator too. Thanks. I recommend this